I've been reading a lot this week - and somehow writing a lot as well. I'm in the homestretch of the romance I've been working on all summer and the end is finally in sight! *yea* But I've also been reading a bunch of new books, and thought I'd share my reviews.

I bought the paperback of FAIRYPROOF, by Constance Phillips, from Barnes & Noble with a gift card I won in a Facebook contest. VIOLET MIDNIGHT doesn't officially release until next month (look for the big release party October 16th) but I was lucky enough to receive an ARC ebook for review. 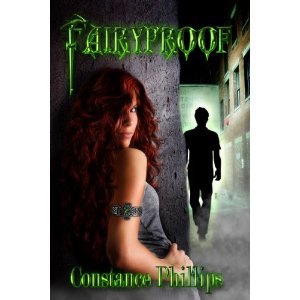 Constance Phillips has written a fairy story for adults that is totally grounded in the real world, with very believable bridges between the worlds of fairy and human. Her fairies have wants, needs, and internal power struggles, as well as prejudices and desires... similar in many ways to human characters, except for their magical powers, which they use to control situations, humans, and each other.

Monique is a fairy hiding in the human world from her brother Kieran, and his plans for her future. Those plans include an arranged marriage to a power-hungry fairy who already tried to force himself on her once. She wants a different life for herself, one of her own choosing. It's not that she rejects her fairy heritage as much as she wants to make her own choices - a concept that most of us can relate to.

She's been using her fairy influence to move from city to city and job to job, until she meets Daniel Elliot, a the only human she's ever met who's immune to her spells and charms. He's seemingly "fairyproof" which intrigues Monique, even as the attraction between them grows. Throw in the fact that her brother is constantly searching for her and other fairies are turning up dead in the human world, and there's a lot going on...

The author keeps up a fast pace as Monique tries to stay two steps ahead of her brother, Kieran tries to solve the mystery surrounding the fairy murders, the evil fairy Eeon tries to find and control Monique for his own power grab, and Daniel must come to terms with the fact that things in his world are not what they seem.

Ms. Phillips does an excellent job of weaving the storylines together to a satisfying conclusion. This is not a mystical or supernatural take on the fairy world, but has fairies that are much more "human" in nature, like the ones written by Charlaine Harris or Eoin Colfer. I enjoyed the book immensely, but at 262 pages it was over far too quickly. I hope there are more stories like this coming soon from this author!

Find it on Amazon and Barnes & Noble 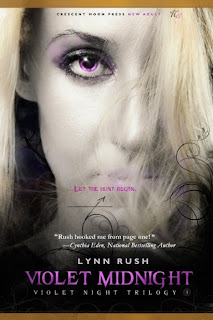 Lynn Rush has a new series about young vampire hunters that grabs your attention from the opening scene and refuses to let go. The action scenes are intense, the heroine is strong and capable, the romance scenes sizzle and none of the vampires sparkle.

This "new adult" book is set on a college campus, but the main characters are all over 21. Vampire Hunter Emma Martin lost her parents in a car crash that left her "marked" with a mysterious tattoo that glows whenever there are vampires (she calls them "vamps") nearby. After losing her mentor to a vamp attack, she swears she'll never let anyone get too close. Until she meets Jake Cunningham, and starts dreaming of the possibility of something resembling a "normal" life.

Jake also lost his parents and grew up in foster homes, and has glowing tattoos of his own that are different but seemingly complementary to Emma's. The attraction between the pair is immediate and crackles with energy and tension as they train together and fight vamps together... and share steamy, Kindle-melting kisses. But everything is not as it seems on the idyllic rural campus, and hard choices face both Emma and Jake as they meet his real family and discover the true meaning behind his marks.

Ms. Rush has a clean, clear writing style that keeps the reader turning page after page until well past bedtime. I love that Emma is strong-willed and capable of defending not only herself but those she cares for and everyone else around her. Move over Buffy, this new young vampire hunter deserves a lot of attention! I can't wait to read the rest of the books in this series - hurry up and write more!

The book officially releases on October 15 but you can preorder it on Amazon and make sure to check out the Big Facebook Online Release Party October 16, starting  at 7pm Eastern. Tons of prizes and giveaways from Lynn and her fellow authors - I think I signed up to give away some stuff at her party, too ;-)

For the weekend, I'm reading LOVE CHOSEN by Marne Ann Kirk, another Crescent Moon Press publication. I'm already on page 74 and enjoying it so far. It's a fae fantasy, not my usual genre lately, but thought I'd give it a try.

What have you read and reviewed lately?