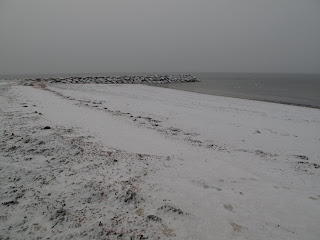 
March certainly came in like a lion yesterday. We woke to snow falling in large clumpy flakes, which soon tuned to rain and back to snow and back to rain... well, you get the idea. There was a slight pause in the wind and precipitation around four in the afternoon, so we took the stir-crazy dogs to the beach for a quick run.

The ocean looked steely grey, mirroring the cloudy sky. The water was abnormally still, the waters taking a break from their winter pounding. The silence was eerie, and by the time we were tromping back up the boardwalk toward home, the wind began to pick up and the surf began to stir behind us. My cheeks were frozen when I finally got home.

The weather today is worse, though not as bad as it sounds off-Cape. The wind blows the icy mixture of precipitation against the side of my house making a constant rattle in the background, to accompany the insipid music of the Wii. The snow falls sideways with the strong gusty winds, leaving icy chunks stuck to the windows. Because of course it's a snow day and the kids have no school. The roads are too icy for safe travel - at least my dentist appointment was also cancelled. And I assume my daughter's evening basketball game will have to be rescheduled as well.

So maybe I won't get much writing done today, with the cacophony of electronic games and "I'm hungry" interruptions, but at least I know they're all safe and warm. It's a blizzard out there.
Posted by Katie O'Sullivan at 8:52 AM