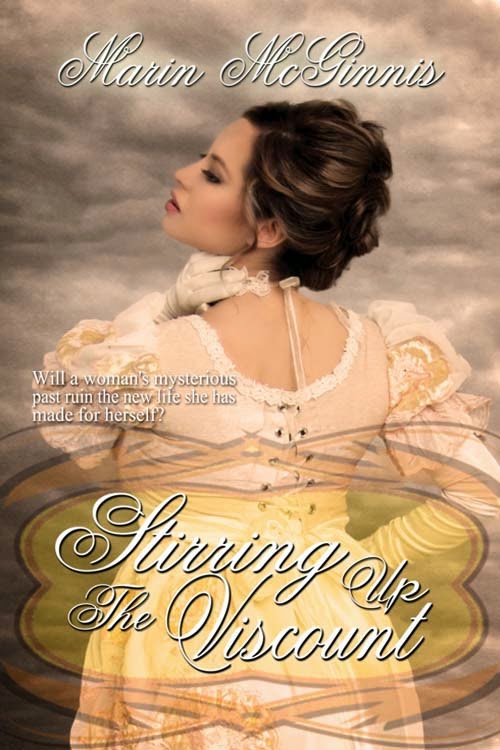 Stirring Up the Viscount, by Marin McGinnis
Published January 2015, The Wild Rose Press


Seeking to escape an abusive husband, Theodora Ravensdale answers an ad in The Times for a job as cook in a country home. A fortuitous house fire enables her to fake her own death and flee to northern England and live under an assumed name. But Theodora’s refuge is not all she would wish, when she stirs emotions in the heir to the estate, Jonathan Tenwick, and in herself.

Meanwhile, as the connection between Theodora and Jonathan grows, her husband learns she did not perish in the fire, and searches for her. Fearing he is close to finding her, Theodora must flee again to protect the family and the viscount for whom she cares deeply. In the final confrontation with her husband, Theodora learns she is stronger than she ever knew, and love is worth fighting for.​

This is a fun historical romance filled with heart, intrigue and a dash of humor. I read it quickly and enjoyed every minute of it. Marin McGinnis has obviously done her homework on the time period, and the kitchen scenes were fascinating for the historical information, while the sexual tension between the two main characters kept me wanting more and rooting for that HEA for the heroine.

Theodora Ravensdale is desperate. The daughter of a successful shipping magnate and baron, her marriage to the volatile barrister Lucien Ravensdale is abusive and loveless. The portrait the author paints of the husbands cruelty is stark, but in keeping with historical norms, since married women had no rights and were considered property of their husbands.

She comes up with a plan for escape, creating a new identity for herself. She secures a position as a cook in a country home, and takes advantage of a kitchen fire to fake her own death and travel to Durham.

Jonathan Tenwick, Viscount Caxton of Longley Hall, is suspicious of the new cook from the moment she arrives at the manor. "Mrs. Milsom" looks too thin - and far too delicate - to have worked as a cook, but Theodora's talent in the kitchen soon wins the family over. The Viscount is intrigued by her, finding himself drawn to the beautiful woman who shies away from his bold advances. He decides to take a more gentle approach, and as the weeks pass, the two develop a friendship and feelings for one another.

It turns out the house fire didn't kill the husband, who searches for his missing wife. The story switches between points of view, showing us Lucien's search as well as the budding new relationship from both Jonathan and Theodora's viewpoints. The tension grows as the search narrows and the relationship heats up, until the secrets and lies all unravel around them, leaving everyone exposed.