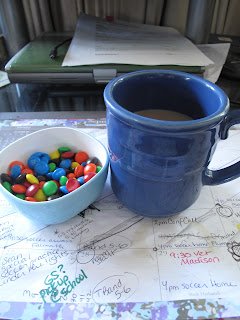 Excuse me if I rant just a little. I figure it's my blog, so I'm allowed.

My youngest child, still in high school, dreams of Broadway and Hollywood. College (a few years down the road still) will mean a BA or MFA in drama. He loves musicals, and follows actors like some kids follow baseball players. If there were trading cards, we'd be knee deep.

So when the director pulled him aside after auditions to let him know she loves him onstage, but had to give the leads to students who could actually sing, he was understandably hurt, but understood. The knife twisted a bit when the teacher told him he should look into singing lessons.

"But I've been taking singing lessons," he said. Just like he'd said on stage during the audition.

"Yes, I think singing lessons would definitely help," she repeated, ignoring his statement.

I came home last night to find my kid wallowing on the couch, obsessing over whether drama was the right choice or not. Or whether to bother continuing with the voice coach.

Not all actors need to be able to sing. For a kid obsessed with musical theatre it's a deep blow, but plenty of Hollywood actors can't carry a tune. The first one that comes to mind is Leonardo DiCaprio, although he's been smart enough to stay away from being cast in any role that requires singing. And now he's got the Oscar to prove you don't need to be able to sing.

Other big names haven't been as honest with themselves or their fans, and taken parts in musicals that maybe they should have avoided. Can you think of any off the top of your head? Or did you block them out (like I tend to do) A quick Google search led me to a great blog by Nicki Swift where she named off the top contenders for the "What were they thinking?" prize (which would most certainly NOT be an Oscar.) Here are the ones I've seen and agree with, in no exact order (except that Russell Crowe does win this prize):

I love all these actors. Just not their singing voices. And although I never saw his film version of Guys and Dolls, I guess even Marlon Brando couldn't carry a tune.
I'm pissed at the teacher. My kid was fine with the ensemble role until she pulled him aside. Although, maybe it's like a bandaid and best to pull it off quickly. I'm not sure what my role as a parent should be, except to encourage my kids not to give up their dreams.

Posted by Katie O'Sullivan at 6:44 AM