Monday Book Review: The Best of Me, by Nicholas Sparks 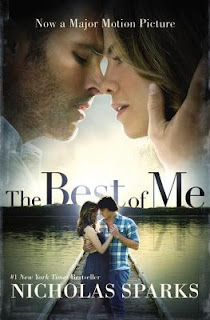 The Best of Me, by Nicholas Sparks
Published August 2014 by Grand Central Publishing


"Everyone wanted to believe that endless love was possible. She'd believed in it once, too, back when she was eighteen."

In the spring of 1984, high school students Amanda Collier and Dawson Cole fell deeply, irrevocably in love. Though they were from opposite sides of the tracks, their love for one another seemed to defy the realities of life in the small town of Oriental, North Carolina. But as the summer of their senior year came to a close, unforeseen events would tear the young couple apart, setting them on radically divergent paths.

Now, twenty-five years later, Amanda and Dawson are summoned back to Oriental for the funeral of Tuck Hostetler, the mentor who once gave shelter to their high school romance. Neither has lived the life they imagined . . . and neither can forget the passionate first love that forever changed their lives. As Amanda and Dawson carry out the instructions Tuck left behind for them, they realize that everything they thought they knew -- about Tuck, about themselves, and about the dreams they held dear -- was not as it seemed. Forced to confront painful memories, the two former lovers will discover undeniable truths about the choices they have made. And in the course of a single, searing weekend, they will ask of the living, and the dead: Can love truly rewrite the past?

My sister came to visit a few weeks ago and was just finishing this paperback while she was here for the weekend. On her way out the door, she left it on my kitchen counter. "I know you like romance," she said. "Have you read Nicholas Sparks?"

Umm, of course. If you're a reader or writer of romance, you've certainly heard of him and most likely tried one or more of his books, just to see what makes him uber-popular. Nora is still the Queen of Romance, but Sparks might be the King. Or at least a Prince.

When you get to be as popular as Nicholas Sparks, no one is checking anymore to make sure you follow the rules. People will buy your books on the strength of past success, and movie rights get snapped up at auction without anyone reading the script. Some of the movies are better than the books, sometimes the book painted a better picture.

With this novel, its hard to tell. Reading it sounds more like a movie than a book. Lots of characters engaging in simultaneous scenes, especially as the action heats up. It reminded me of the scene from West Side Story where everyone is singing about their expectations for "Tonight" which vary wildly and all come to a head at the end.

All of the main characters in The Best of Me take turns leading the reader with their point of view, even each of the two bad guys. The two main character are Dawson and Amanda, and most of the book is from one POV or the other. Sometimes when they are together, the author indulges in a bit of head hopping, and I wasn't sure if it was purposeful to show us how close in thinking they were...or if it was just lazy. There was also a lot of repetition and overwriting, as if the author had a specific word count in a contract that needed to be fulfilled.

Don't get me wrong. I did like the storyline. I did like the characters and the ways they were so fully fleshed out. And yes, I did end up crying at the end, even though I knew what was going to happen. The story itself is emotional. Sparks is a master at making the reader feel, whether they want to or not.

But I think I might like the movie better for this one. We'll have to rent it and see.

Want to try it for yourself? Find it HERE on AMAZON.
Posted by Katie O'Sullivan at 1:09 PM

Email ThisBlogThis!Share to TwitterShare to FacebookShare to Pinterest
Labels: #Review, #romance, Monday Book Review, Nicholas Sparks, The Best of Me