The entire next week is devoted to sweet and sizzling summer treats from the romance authors of The Wild Rose Press (including me) !! And there's a grand prize of a Kindle Fire so be sure to enter the Rafflecopter too! So make sure you follow the hop - the linky tool should be below.

I was going to talk about Cape Cod and fun things to do at the beach.... but this is a romance blog hop. We want romance-type treats! Which means... hot summer kisses, right?

First kisses and summertime so often go hand-in-hand. The weather heats up, school's out of session, work slows down a notch, and suddenly the world seems full of endless possibilities.Even after you graduate from college, there's still something about summertime that heats things up. And I'm not just talking about the weather.

Do you remember your very first kiss? Or the first kiss you had that you knew - you just knew - would change your life? Sometimes first kisses are planned, strategized and fantasized with friends, and dreamed about long before they occur.

Sometimes they just happen, and it's like lightning out of the blue.

I remember my first kiss with that special guy who I ended up marrying... It was the beginning of summer, and my friends from college had talked me into going to an alumni night at a local bar in Boston. His friends had dragged him along as well. When he walked into the bar, the girl I was chatting with saw him and said, "See that guy over there? My mother always wanted me to marry him."

I turned to look. It was a guy I kinda knew from college, although he'd graduated a year ahead of me. We had a couple mutual friends. I knew he worked in Boston and had seen him at gatherings and parties, but never thought of him as "boyfriend material" before. I had to ask my friend, "Why? Why him?"

She shrugged. I definitely remember the shrug, although I don't remember her exact answer to my question. I decided to find out for myself. Before the night was over, we had that first kiss, and I knew I'd found something special. Someone special. Twenty four years and three kids later, I still love kissing him.


* ~ * ~ * ~ *
I write romance set on Cape Cod, and writing about first kisses are some of my favorite scenes. In CRAZY ABOUT YOU, the characters share a first kiss that's one of those just-happen-out-of-the-blue kisses... that changes both of their worlds. Here's the excerpt: 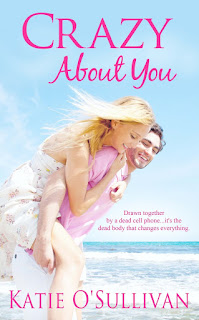 On impulse, he leaned in and captured those pouty lips in a real kiss, soft at first, testing, tasting iced coffee and minty toothpaste, her heart beating a fast staccato against his chest. He pulled her closer, the kiss going from searching to scorching in seconds. She slid one hand down his chest, twisting the fabric of his shirt in her hand to hold him tight, forgetting—or maybe not caring—that they were in the middle of a crowded sidewalk café making an absolute spectacle of themselves. Her legs pressed against his, the kiss deepening as his tongue swirled around hers. He’d never felt so aroused by a simple kiss—hell, he’d never felt this aroused in his entire life. This one, whispered a voice in his head. She’s the one for you.


Climate scientist Chase Anderson races from one project to the next, unwilling to slow down in his quest to save the world’s oceans. He has no time for family or relationships until he crashes into an impetuous blonde with a quirky sense of humor. One sizzling kiss makes him seriously reevaluate his priorities. And his sanity.


NOW, tell us about YOUR first kiss! Leave a comment on my blog to be entered to win your own ecopy of CRAZY ABOUT YOU. And don't forget to enter the Rafflecopter for a chance to win a Kindle Fire! Happy Summer Reading!

Check out all the fabulous writers and their blogs
in the SUMMER BLOG HOP below!