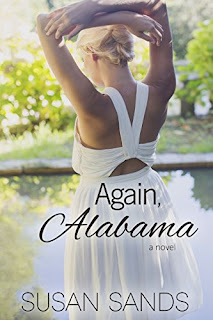 
Cammie Laroux is back in Alabama—again.

Dragged back to her small town to help her mother recover from surgery while rescuing the family event planning business should be a cinch. Even for a disgraced television chef, right? Wrong.

Among the many secrets Cammie’s family’s been hiding is the fact that their historic home is falling down. Oh, and the man hired to restore the house, Grey Harrison, is the same high school and college love of her life who thrashed her heart and dreams ten years ago. Yeah, that guy.

Grey, a widower with a young daughter, has never stopped loving Cammie, and when they are face to face once again, the chemistry is off the charts. Cammie may be in full-blown denial, but letting go is no longer in Grey’s vocabulary, even when winning Cammie’s forgiveness and renovating their love may seem like an impossible build even for a master architect and carpenter.

Over the weekend I read two books where the heroine is drawn back home and into the family business after "failure" in the big city. Coming home is one of those common themes, and interestingly enough these two books had another thing in common - the family business is an inn. In this first book, it's an historic house that caters to events, in the second it's a Bed and Breakfast.

Here's the thing. My parents owned an inn in Vermont. So while I think this first author has some peripheral knowledge of what goes on behind the scenes, the second seems to have merely watched Bob Newhart reruns to get the main gist.

In Again, Alabama, the failure is professional. Cammie works on a cooking and lifestyle show where the star's hair caught on fire and the star publicly blames Cammie. After signing non-disclosure agreements, her family calls her home to help (and heal) while her mother undergoes back surgery. Leaving her successful, sweet, and understanding fiance on the coast, she heads to Alabama to run the family inn while mom recovers. But no one told her her high school sweetheart and the boy who shattered her heart moved back to town and is renovating the inn. Will she give up her engagement to take another chance on the boy she still loves?

I wish the author had taken her time to write a longer book, or leave out some of this to give it more focus. There was so much going on and it was all good stuff, but she never delved into the details that make you invest your heart in the story. Lots of character, lots of disparate dramas going on all over the place. When she focused on a scene or an emotion it could be exquisite, but the story itself was so sweeping that it seems she felt the need to rush us through, giving us short snippets and interactions to show the time moving along without fleshing out those scenes.

On the other hand, I read all the way through, and enjoyed it as a light beach read. There may be too many characters and too many POVs and too many twists to the story, but it has a real-ness to it that made me keep turning pages. Even the heavy confrontations and big reveals didn't feel so heavy, delivered like a slice of good lemon meringue pie with a big ol' side of "bless her heart." I'd give this 3.5 - 4 stars, and recommend for a light read to throw in the beach bag as a just-in-case read. It's the first in a series and free on AMAZON right now. 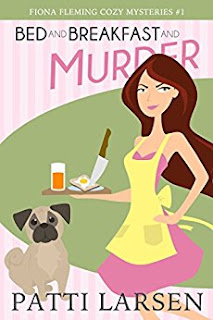 Bed, Breakfast and Murder, by Patti Larsen
Published by Mayhem and Murder, Inc., January 2017
About the Book:


A cozy murder mystery series to die for!
I tried not to look down the mouth of hell staring back at me from inside the glaringly pristine outer ceramic shell of the white throne, my throat catching, stomach doing half flips and a rather impressive rollover routine that would have gotten at least a 9.5 even from the Russian judges. Instead, I forced myself to smile and swallow and remind myself the elbow length yellow rubber gloves grasping the handle of the standard issue plunger were all that stood between me and Pooageddon.

Suck it up, Fee. Big girl panties and adulting and all that.

"At what point," I waved the dripping plunger, wincing as droplets of yuck flew, "did I think owning a bed and breakfast was going to be glamorous and romantic?"

Fiona Fleming hasn't lived in Reading, Vermont in over a decade, her escape from small town living leading her to New York City and a life of adventure. An adventure that has left her with no career, an ex who cheated on her and zero plans for the future. And then, in the shocker of a lifetime, Fee's grandmother wills her a bed and breakfast. Awesome! It's the fresh start she's been dying for. Or is it?

Petunia's might seem like a refuge from her cheating ex and so-called life in the big city, but being accused of murder within two weeks of arriving back in her hometown? That's anything but charming. Can she uncover the truth before the handsome new sheriff puts her behind bars instead of asking her to dinner?

As I mentioned in the previous review, my parents actually did own an inn in Vermont. It was 42 rooms, restaurant, bar, indoor and outdoor pools, and also catered to events like the first inn in the Alabama book. So, more than a B&B, less than a full-blown hotel, still a real-live inn.

For so many reasons, I'm guessing this author has never had the experience of actually living and/or working in an inn or B&B... and the inconsistencies and bad details bothered me a lot. If only because unlike the other author I reviewed this week, this author offers up lots of details and has an overly wordy, self-aware and sarcastic voice that would fit better if she knew what she was talking about. You can't give details if you don't know details.

Again, I read this all the way through. Again, it's the first in a series staring these characters in this small Vermont town. But no, I can't recommend and no, I won't be reading more.

Posted by Katie O'Sullivan at 6:01 AM