Friday Feature: A SWEETER SPOT for 99 cents! (and an #excerpt !) 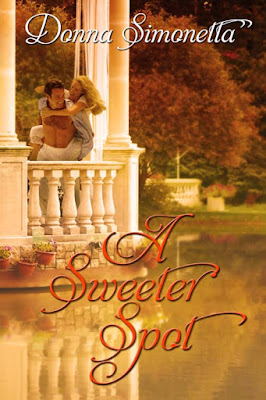 
Magda knows a 28-year-old shouldn’t run away from home, but Rivers Bend is the ideal escape. Helping out her best friend will get her away from her uber-wealthy, controlling grandmother and duplicitous ex. She doesn’t expect the quirky little town to feel so much like home. Add in hotter-than-the-sun Jeff and his daughter, and leaving seems as unthinkable as it is inevitable.

Raising Sam alone, Jeff knew he wanted her to grow up in his supportive hometown. The arrival of a feisty new tenant sends Jeff's world spinning. Magda fills a void in his life that he’d like to make permanent.

Will love triumph over the most powerful woman in the country, and can they figure out how to make this happy-for-now in Rivers Bend into their happy-ever-after? 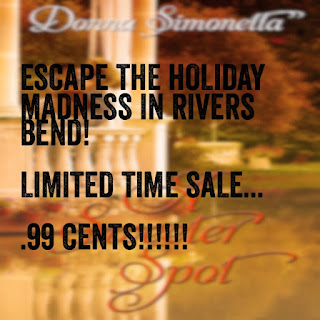 Excerpt:
“Being cheated on is no fun. It happened to me once. Up here,” he tapped his forehead. “You know it’s not your fault. But here,” he tapped his chest over his heart. “You feel like it has to be your fault – like you could’ve done something to prevent it. But you couldn’t have. It’s all on him, Maggie. Not you.”
She picked a dandelion, whose flower had turned into a puffball, and blew on it, scattering the fluff to the wind. “Maybe. Maybe not. But thanks for the support.”
She pushed to her feet and took a couple of steps toward the river. Jeff rose and followed.
How could he be so angry at a man he didn’t even know? How could this Pierce jerk have slept around on a woman like Maggie? And the prick had even made her doubt herself in the process. It was written all over her anguished face.
He stood behind her and gently kneaded her shoulders. He turned her to face him and cupped her face in his big hands.
“This Pierce guy is the biggest fool on earth to go to someone else when he had you at home, Maggie.”
She blinked away tears, and he felt his heart constrict. Before he could think it through and decide it was a really bad idea, Jeff dipped his head and captured Magda’s lips in a gentle kiss.