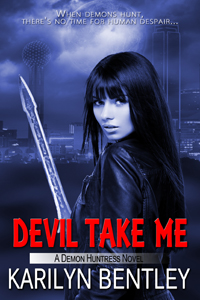 Reeling from a personal tragedy and abandoned by all she loves, the world's newest demon huntress, Gin Crawford, sinks into a deep despair. She’s forced back to reality by news of a large number of people committing suicide, all on the same night. Suspecting demon involvement, Gin must work with her sexy but estranged mentor Aidan Smythe to track who, or what, is behind the deaths.

Leads to a new discovery…

As they come closer to finding the culprit, they realize their employer, the Agency, is hiding its own secret, one which threatens Gin's very existence. New discoveries reveal that even those dedicated to eradicating evil can be bought. Can Gin and Smythe forgive each other and work together or will they fall under the demon's thrall?

This urban fantasy series is fast-paced and fun to read, filled with sarcastic characters and sassy comebacks. If you like to read paranormal romance with strong but flawed female heroines, skip this review and go start with Book One, Demon Lore, instead. You'll be so glad you did, especially since there are already four books in the series available now - and the fifth is on its way!

Devil Take Me is the fourth book in Karilyn Bentley's Demon Huntress series, each of which takes us further into the world of demons and the Agency that keeps the human world safe.

If you're caught up on all things Demon Huntress-y, keep reading. I'm not posting any spoilers for this book, but if you're behind on the series itself I may spoil a plot twist.

While our reluctant heroine Gin Crawford may be new to the demon hunting game, she's an old soul who's already seen too much of the bad side of humanity. Add to that her empathic power of touch and she knows more about how people really think and feel than anyone should. She sounds like a snarky pessimist as she tosses sarcasm bombs everywhere she goes, and yet at the root of it all she still wants to find good in the world and help people. And find happiness.

Unfortunately, Gin's happily-ever-after guy thought she cheated on him in Book Three, and won't return her calls, leading to poor choices with copious amounts of alcohol and a brutal hangover... which is where this book begins. Happiness seems wa-a-ay out of reach in Chapter One, so much so that Gin begins to be haunted by an elusive depression demon, who she can't seem to kill. Or escape on her own.

She needs to get back together with Smythe, her co-worker and former lover... and not just because he's super hot and makes her skin hum with pleasure, but because a demon huntress needs her mage to have her back. You can't fight depression - or depression demons - on your own. You need your friends.

There are a few new twists added to the story as Gin gets deeper into the job and "office politics" as it were.There's much more going on at the Agency than anyone lets on, but the truth is beginning to unravel. With her twin brother finally embracing his ghost whispering skills, they're able to figure out more about their family history and why they have the skills they do. And how to embrace them more fully.

Okay, it's really hard to write a review of an action packed book without spoilers, so I'll have to stop here. Karilyn Bentley writes with humor, heart and sizzle - and I can't wait to see where she takes Gin next!

Grab a copy at the following outlets: