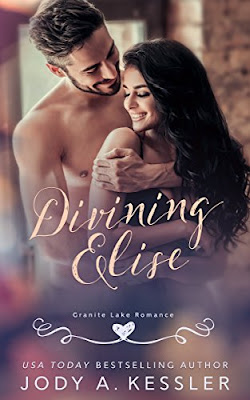 Elise Martinez wished her date with destiny didn’t include being run off the road by the most caring, handsome, and intelligent man she’d ever met.

Moving to Granite Lake to manage a bookstore and coffee shop meant Elise could finally leave her haunted past behind, but being a psychic mom to a deaf child has its benefits and downfalls—and her guarded heart isn’t ready for a new romance.

Rob Everett never imagined giving up corporate law to open a brewery with his brothers in Granite Lake would begin with a car accident and the arrival of a surprise baby.

As if being a single dad and starting a new business weren’t challenging enough, Rob can’t get the beautiful, mysterious, and feisty bookstore manager out of his mind.

For Elise and Rob, falling in love is a complicated, sexy, and emotional enterprise.

Mix in a baby, a haunted brewery, craft beer, and a dangerous ex-husband into this recipe of love and their future isn’t as easily divined as the fates would have foretold.

**A steamy, stand-alone novel with a happily ever after.


Like the other books in this series, the fourth book in Jody Kessler's Granite Lake romance series, Divining Elise, gives us a second chance romance between two jaded individuals. Ms. Kessler's lyrical writing style lends itself to interior monologues plagued with second thoughts and self doubt, as her two main characters weave an intricate dance around each other, their shared past, and the sizzling chemistry they both try so hard to deny. Unlike the other stories in this series, the author weaves in touches of the paranormal style she also excels at in her other works.

Elise Martinez has psychic premonitions and dreams, and - as it turns out - can see the ghosts haunting her new neighbors' building. She and her hearing-impaired son have just moved to the small mountain town of Granite Lake, California for new opportunities - Elise for a chance at a new job opening a bookstore with her best friend, and a new school and new doctor for Colton.

Rob Everett is the oldest of three brothers, and gives up a lucrative law career to go into business with his siblings, buying and renovating an old brewery in Granite Lake. Before he has a chance to begin his new life, his old life throws him a curve ball in the form of a baby daughter. His ex-girlfriend died giving birth to a child she never told him about, but listed him as the father on the birth certificate. The hospital sends him home with a daughter who doesn't come with an instruction manual, throwing a wrench into his carefully laid plans.

Although Elise has dreamed of Rob several times, she tries to keep her distance, not trusting that her attraction to her hot neighbor will turn out any better than her relationship with Colton's father - a man who ended up abusing her and landed himself in jail. Elise is done with men - but Rob is not the kind of guy to give up. And when they do finally get together, the scenes are sizzling.

Lots of plot twists keep the story moving along in rollercoaster fashion - between Colton's medical problems, Elise's shady ex-boyfriend, the mystery of the ghost and a decades old murder, and Rob's legal battles to keep the baby he wasn't sure he wanted but now can't let go of.... stir in a heavy dose of crackling chemistry any time Elise and Rob are in the same room and you get a book where the pages almost turn themselves. This is a great addition to the series and adds another layer of depth to the town of Granite Lake.

The books in this series are all stand-alone romances and can be read in any order, but the stories share common characters who add depth and breadth to the narratives, making the small town come to life. I love the way Jody Kessler writes with such passion and insight, making her characters real and believable with quirks and foibles but also with passion and dreams. This is not a fast read, but one to be read slowly and savored, as she packs meaning and feeling into each paragraph.

Five solid stars for this enjoyable story. Grab a copy on AMAZON