99 cent sale for BREAKING THE RULES 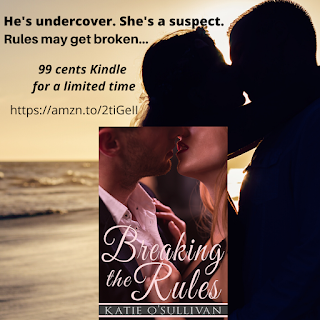 Jake Campbell hates rules. Undercover to stop a drug ring at a posh Cape Cod resort, he can’t resist the fiery head chef, Abbie Duncan. She may be on the suspect list, but he can’t keep his hands to himself. With a rising body count, he must keep Abbie safe…but can he trust her with his jaded heart?


Abigail Duncan planted both elbows on the bar and leaned in close, t-shirt pulling tight against her curves. After the day she’d had, this was one more headache she didn’t want to deal with. “Level with me, Brian. How many has he had tonight?”

The bartender shook his head with a frown, looking her straight in the eye and ignoring her assets. “Like I said, Abbie, it’s still his first pint. George has been nursing it for the last hour.” He opened the cooler to grab several long necks, deftly flipping the caps as he plunked them onto a tray.

She heaved a sigh and let her shoulders relax a fraction. “Okay, I believe you. It’s just that his doctor said he’s not supposed to drink with his new meds.”

“Yeah, but your dad can’t watch the Red Sox with the guys and not have a beer in front of him.” Brian gestured at the table of retired cops jeering at the big screen. “Stop being a spoilsport and let him have his fun.”

Her shoulders stiffened again. “Honestly, I didn’t know he’d be here when I decided to bring the Inn’s kitchen crew for after-work drinks. There’s only one sports bar in town, you know.”

“It’s all good. Try not to worry so much.” Brian handed her the tray of drinks. “You sure you got this?”

She winked at him as she balanced the tray on her left hand, then made her way through the crowd of baseball fans.

Back at the foosball table in the corner, four of her co-workers engaged in a fierce battle. The rest crowded around to cheer them on. If today was any indication, her kitchen should run smoothly this summer. After all, Mothers’ Day was one of the busiest days of the year – despite the $95 per person charge for the buffet spread. Everything went off without a hitch. Well, almost everything. It was a five-star restaurant. Something was always making the head chef apoplectic.

One of the new fry-cooks – Dimitri? Or is that Matko? Those two are like peas in a pod – scored a goal and raised both hands in victory while the other side began to protest. Raising her voice above the din, Abbie congratulated the winning team as she rested the tray of drinks on the edge of the foosball table. “This round’s on me, you guys. Great job today.” Eager hands reached for the long necks, clinking the bottles together in salute.

“To a great boss.” Ian threw an arm around her shoulder to pull her close. He’d been the expediter in her kitchen for the past several summers, always choosing to winter somewhere warmer, whether Key West, Barbados, or this past year in L.A. “Your menu was genius, no matter what that fat bastard Delacorte says. If anything was a problem today, it was the big man’s attitude.”

Abbie felt her cheeks heat while everyone raised their bottles and voices in agreement. Francois Delacorte, the Executive Chef of Chatham’s prestigious Atlantic Coastal Inn, wasn’t one to mince words. There was no mistaking his outrage at discovering the kid-friendly choices discretely tucked away on a corner table at the Inn’s exclusive buffet.

In Abbie’s opinion, Delacorte’s outrage was directly linked to his mile-wide misogynistic streak. Since his first day at the Inn, he’d taken an immediate dislike to both Abbie as Chef de Cuisine in the Inn’s main dining room, and her coworker Miranda, the Executive Pastry Chef, and took every opportunity to belittle their abilities.

A hand jostled her shoulder. “Earth to Abbie,” Ian said, laughter in his voice as she focused her gaze on him. “We lost you for a moment there.” He clinked his bottle to hers. “Don’t let him get to you.”
She gave Ian a half smile and sipped her beer. She had to put up with the pompous Frenchman for a few more months before she had enough in her bank account. After years of taking orders from others, she was ready – more than ready – to strike out on her own. Her goal was to open her own restaurant before her thirtieth birthday, a mere year and a half away. One final summer at The Inn wouldn’t kill her, but it certainly wouldn’t be a cakewalk.

Tipping the bottle to her lips, Abbie drained the rest of her Bass Ale. Swiping the back of her hand across her mouth, she locked eyes with the most delicious hunk of blond stranger she’d seen in… well, in forever. He sat at one of the high top tables along the back wall, his wide shoulders and solid biceps stretching his shirt in intriguing ways. The smallest of smiles played across sculpted lips while he held her captive with his eyes. The air seemed to whoosh out of the room as she struggled to breathe under the intensity of his stare, each second lasting an eternity. She licked her suddenly dry lips, trying to grab the reins of her runaway libido.

The guy’s dark-haired companion turned to follow his friend’s gaze. The second man’s lazy grin looked cocky as hell, raking his eyes up and down her body before giving her a deliberate nod and wink. Really? Abbie chuckled as she shook her head and turned away, the intensity of the moment evaporating like steam over a sauce pot. Ian nudged her with an elbow. “What’s so funny?”

Abbie had more important things to focus on than some blond in a bar, no matter how godlike his physique. She smiled at her coworker. “Nothing. Nothing at all.”

Jake Campbell frowned, his focus sliding away from the curvaceous redhead and back to his partner. “What do you think you’re doing? Jeez, Garcia, we can’t afford to screw up this job.”

The other man snorted in disbelief. “Yeah, right. I saw you checking out her ass when she passed by with that tray of drinks.”

Jake’s voice lowered to an angry growl. “She works at the restaurant, you moron. Didn’t you go through the case file?” Okay, so maybe he had been checking out her curves. A guy notices perfection when it walks by him.

“I don’t remember any of those uptight cooks having an ass like that. This op gets better by the minute.” Garcia tipped his beer bottle and leered toward the foosball table.

A surge of annoyance flared through Jake. “She’s a suspect, not your personal eye candy. Her bank turned her down for a loan last year. Money problems are always a strong motivator. Plus, you’re spending the next month working with her as your boss.”

“Technically, the pastry cooks work for the Executive Pastry Chef, who works in tangent with the Chef de Cuisine and reports directly to the Executive Chef.”

Garcia smiled. “My sisters both work in fancy Boston restaurants. I know the pecking order. Although working under that redhead sounds like it might be fun. Under her, on top of her… Hell, I can think of lots of interesting positions.”

“Are you taking any of this seriously? We’re chasing drug dealers, not one-night stands.”

“I’m getting into my undercover persona. My character’s a player, remember? Besides, one night with a woman who looks like that would never be enough.”

His friend’s expression turned grim. “Dude, I’m acutely aware of our job responsibilities. You need to lighten up before you tank the rest of your career because of one stupid chick. You’re thirty four, not dead.”

Jake started to protest but Garcia held up one hand and shook his head. “Listen, Campbell, it’s time you move on. I know Tessa broke your heart but she didn’t chop off your dick.”

Jake went still. “My ex has nothing to do with this.”

Yeah, he couldn’t deny that. Getting arrested for assault and making headlines while undercover was not Jake’s most shining moment. “You should’ve put in for a new partner.”

“As long as someone’s happy,” Jake grumbled. “I still think it’s odd that the Chatham police chief reached out to Boston for undercover help. You’d think a town like this would be too small to hide a mole in the department.”

“That’s exactly the problem. In a town this small, everyone knows everyone, and it’s probably second nature to put your friends above the law.”

Jake grimaced. He may have crossed a few lines in the past, but how did any policeman justify breaking the law? Finishing the last of his beer, he pushed back his stool. “I need another drink.”

“Because I brought up Tessa?” Garcia shook his head. “Let it go, man. Let her go.”

“Believe me, I already have.” Jake wasn’t a forgive-and-forget kind of guy. He’d never forget the day he’d stopped by Tessa’s apartment at lunchtime and found her skinny ass in bed with her yoga instructor. She claimed the sex meant nothing. That she loved Jake. Yeah, right. He didn’t need Tessa’s version of love.

“Want another beer or not?”

Garcia fished a twenty out of his wallet. “See what kind of tequila they’ve got back there too. I’m buying.”

“Like Mama always says, it’s not a celebration without tequila.”

After two years as Garcia’s partner, Jake was used to hearing what Mama had to say on practically every subject, but this was a new one. “What are we celebrating?”

Garcia smirked. “The fact that your junk didn’t wither and die. I saw the way you eyed the redhead. It’s time you got on with your life.”

Jake glanced over Garcia’s head to where the woman in question pulled out her ponytail holder and ran her fingers through long, wavy locks that looked so soft, so touchable. She laughed at something her companion said, a throaty sound that twisted Jake’s gut in a strange way.

Maybe Garcia was right. It was time to move on.

GRAB YOUR COPY FOR 99 CENTS ON AMAZON