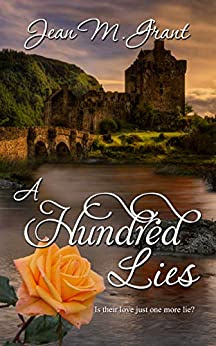 Rosalie Threston's fortune-telling lies have caught up with her. Uprooted yet again, she's on the run from a ruthless English noblewoman. She flees to Scotland and seeks refuge in the arms of a laird's son who happens to be a real Seer.

A bloody past and inevitable future plague Domhnall Montgomerie. He avoids physical contact with others to ease the painful visions. When an accidental touch reveals only delight, he wonders if Rose is the key to silencing the Sight.

Mystical awakening unravels with each kiss. But can Domhnall embrace his gift in time to save her life, even it means exposing her lies?

This was a wonderful historical read, with strong characters and enough twists and mystery thrown in to keep the pages turning. Author Jean Grant has a marvelous way with words, transporting the reader back in time to the sights, sounds, and scents of Scotland in the 1300s. This is the third story in this trilogy, following one family across decades and generations.

Rosalie Threston is a peasant living with her aunt and uncle, running a small shop and working odd jobs in a hand-to-mouth existence. She sells trinkets and tells fortunes, much of her business resulting in traded food instead of actual cash payments. While she is adept at reading people, she knows she has no actual psychic powers, relying more on her powers of observation than the supernatural.

Domhnall Montgomerie is the heir to both the castle and the supernatural powers passed down through this series, and through the generations from his Viking ancestors. As a child, Domhnall experienced scary psychic visions portending death and destruction, so for ten years he's avoided human touch. Until he meets Rosalie in the marketplace and realizes her touch brings him nothing but peace and calm. He thinks it's due to her own psychic abilities, not realizing her fortunetelling is a charade. All lies (like in the title.)

Thieves, vandals, and killers stalk the periphery of the story, the multiple threads coming together near the end. In the end, solving the mystery will depend on whether Domhnall embraces his gifts - and on whether he can trust Rosalie.

Posted by Katie O'Sullivan at 3:53 PM