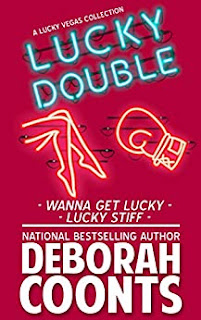 This boxset includes Book One (Wanna Get Lucky?) AND Book Two (Lucky Stiff) in the bestselling Lucky O’Toole Vegas Adventure series. With over 700 pages and 1000+ five star reviews, you don’t want to miss this bundle of Vegas highjinks, murder, romance, and laugh-out-loud moments we all can relate to.

Everyone Has a Hidden Talent

For Lucky O’Toole it’s murder…solving it.

Surviving in Sin City takes cunning, a pair of five-inch heels, and a wiseass attitude. Lucky has mastered them all and has a pair of legs she uses to kick butt and turn heads.

As the Chief Problem Solver for the Babylon, Las Vegas’s most over-the-top destination, mischief is in her job description.

She’s good at her job.

She’s less good at life. But who has time for a life when there’s a killer on the loose?

Light, funny, romantic mysteries providing a Vegas escape appropriate for anyone looking for a good laugh.

I found this indie author through BookBub (and if you don't get their daily emails of free and discounted books, what are you waiting for) ...and I'm so glad I clicked and bought this two-fer full of snark and wit and crazy situations and oh-my-god this was a fun read.

Be warned there are a bunch of negatve-nelly reviews on Amazon because of the language and adult situations, but tell me how can an author set a series in Vegas in this day and age without dropping f-bombs? That said, if coarse language is a deal breaker for you as a reader, steer clear of this series. And of Vegas in general.

This two-books-in-one are the first two in this series about a Las Vegas "Fixer." Think Ray Donovan in designer dresses and heels, without the baseball bat or nearly as much bloodshed. Lucky's actual title is ostensibly Director of Guest Relations for a major casino/hotel, but she has so much more on her plate than dealing with tourists complaining about their rooms. Every work day seems a million years long, she barely sleeps and has no social life outside of work. Or at least she doesn't when we first meet her.

Lucky O'Toole was born and raised in Vegas, the City of Sin. Her mother runs a legal whorehouse, where she was raised until she was 15, when she lied about her age and moved to the city to work a legit job in one of the major casinos. Her best friend is a female impersonator who lives one floor above her and works at her resort, and her executive assistant is a demure powerhouse who would put Moneypenny to shame for being lazy.

Each of the books has a central murder Lucky must unravel along with a myriad other subplots to untangle, as well as a complicated love life and don't even get me started on her family! Reading these two stories - back to back, mind you, when I shoulda been working - was like reading Stephanie Plum or Kinsey Millhone on steroids with the sarcastic tone dialed up to eleven.

If you like strong, take charge women with a heft dose of snark - and you don't mind f-bombs exploding on the page - try one of these Lucky O'Toole mysteries.

Grab LUCKY DOUBLE on Amazon for $3.99 to get your Vegas on.

Posted by Katie O'Sullivan at 7:36 AM