And Now for Something Completely Different... 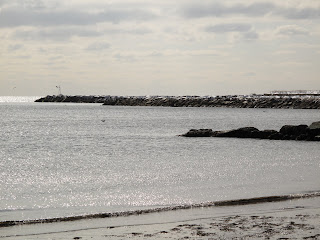 Cape Cod Weather Today: The fog is burning off finally, and it looks like it'll be a bright morning! We did end up going to the beach yesterday in the thick fog, which wasn't much fun. I know I usually like all this different weather... but this spring is getting old. Period. Need some warmth.

After getting it out on the blog yesterday, I sat down and rewrote my synopsis and query letter and think I did a kick-ass job. So of course I mailed it right out. Perhaps I'll even get back to my rejection a day, I mean QUERY-a-day mailings that I did earlier in the year... I've taken all that advice I got and tightened up the story, refocused it and made the characters more engaging. I think. Let's hope someone else thinks so, too.

And now for something completely different.

When I was fresh out of college I worked at an advertising agency, first as their receptionist (with the promise of moving up) and then in the media department (they kept their promises.) They had a great annual anniversary party on Cinco de Mayo, which I got to be part of for the three or four years I was with them. It was great fun being part of that world, and I have lots of fond memories of those days in Boston.

But even now, every year on Cinco de Mayo, I think of Gearon Hoffman Advertising and wonder what they're up to. Yesterday I decided to look them up online - and found their website, which is funny and interactive, and really quite engaging. I was impressed. Some of the same people still work there as when I was there - besides Dan Gearon and Bob Hoffman, whose names are on the letterhead. Heidi Ferris is still head of the media department, and Kathy Carino now runs client services. She even has a 13 year old son, which I guess I remember from Christmas cards but it all runs together. We've lost touch over the years.

Have you lost touch with people you used to see every day? Who were such an integral part of your life that you figured you'd know them forever? It's strange to look back on things like that, but also there are some great memories that deserve revisiting. Who have you lost touch with, and why? And would you want to reconnect?
Posted by Katie O'Sullivan at 6:44 AM