Monday Book Review: BREAKING UP WITH BARRETT, by Katy Regnery 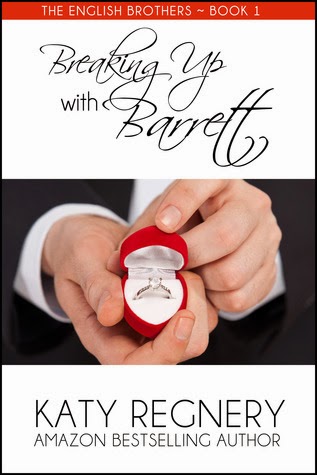 Breaking Up With Barrett, The English Brothers Book 1
by Katy Regnery
Published 2014


Breaking Up with Barrett is the first of six books about the Philadelphia-based, wildly-handsome English brothers who are all on the look-out for love.

(Except Alex. He's a womanizing manwhore. And maybe Stratton, because he's wicked hot, but super awkward around girls.)

Barrett English, aka "the Shark," is the fair-haired, first-born of the English brothers, and the CEO of the oldest, most prestigious investment banking firm in Philadelphia. He rules the boardroom with an iron fist, refusing to take no for an answer and always getting his way.

Emily Edwards, a first-year doctoral student at the University of Pennsylvania, grew up in the gatehouse on the outskirts of Barrett's childhood estate. The daughter of his family's gardener and housekeeper, she was always looking through the window of privilege, but forced to remember her place at the very periphery of the kingdom.

When business partners suggest that a fiancee might soften Barrett's image over business dinners, he approaches Emily for the "job" of fiancee. And while love wasn't necessarily on Barrett's radar, he begins to realize that Emily always has been. But will his take-no-prisoners boardroom tactics work on the heart of the woman he loves?

In this wonderful new contemporary series, Katy Regnery creates an interesting set of wealthy Philadelphia brothers, each with a unique personality and history.

This first book gives us the eldest brother, Barrett, the most serious and staid of the bunch and yet the one who's been hopelessly in love with the gardener's daughter since the day she was born. He is so focused on work that he doesn't really realize the extent of his emotions, or know how to act on them, compounded by the fact that its an Upstairs/Downstairs frowned upon relationship before it even begins. She is, after all, the Help.

The points of view are mostly from the perspective of Emily Edwards, said daughter, who attends grad school at UPenn, but accepted a position working for Barrett to earn extra cash, pretending to be his fiancé during certain social functions and business meetings. It has started feeling a little too real for Emily, and she plans to "break up" with him and move on with her life, but Barrett has other plans.

Sweet, sexy and engaging, this was a fast read that made me smile. Yes, full of cliches but somehow the author made it all seem new and it worked pretty well. Regnery did a great job creating believable characters and situations, and despite a few clunky scenes I thoroughly enjoyed this story.

Posted by Katie O'Sullivan at 1:19 PM