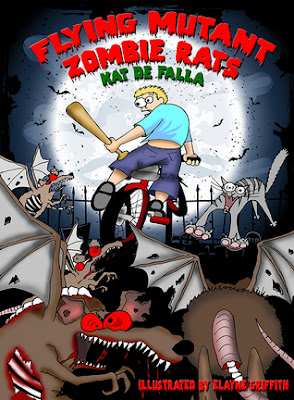 
Summer vacation is almost here! And Pea O'Neil is stoked to try out the new local BMX track which is finally open. He and his gang of friends can ride all summer long!

But when Pea tries a back flip, he unwittingly opens a portal to another dimension and hordes of flying mutant zombie rats are unleashed upon the city. With the help of an otherworldly talking cat sent to help prevent the demise of humankind, Pea and his friends must hunt down the hungry mutants and send them back before the portal closes.

But when the zombie rats attack a neighbor man, the boys have to enlist the help of a graveyard looney and the city's stray cats. With time running out, Pea and his gang track the monsters to the city's sewer system. But in the city sewer of Milwaukee, Wisconsin, it’s eat…or get eaten.

Middle grade boys are a difficult audience to write for. Having active boys of my own, I know how hard it was at that age for a book to capture their attention for very long. Kat deFalla walks a fine line in her debut middle grade book between slapstick humor, supernatural adventure, and old fashioned boy bonding. Throw in some spot-on specific BMX dirt biking references and really creepy aliens and you've got something a boy can dig into.

Peabody "Pea" O'Neal is our hero, living in Milwaukee, Wisconsin in the early 1980s. He has a band of friends whose main interest is BMX dirt biking. The story begins near the start of summer vacation, and just as a new dirt bike track is set to open in town. Pea sneaks out of his house in the middle of the night to be the first to try riding on it, and gets spooked by a strange occurrence in the park. He doesn't tell his parents or friends, but then the next day a vortex opens and strange alien creatures fly into the park, creating havoc. It's up to Pea and his friends, and a strange alien cat, to save the world.

Parts of this story reminded me of the great Time Warp Trio series of books by Jon Scieszka, which were the stories that got my my oldest son to appreciate books on his own. The slapstick humor and frank, funny interchanges between deFalla's characters made me smile. Other parts reminded me of the boy bonding interactions in the 80s movie Stand By Me, which was based on a short story by Stephen King. While the adults played a slightly larger role in this story than in that movie, they are dismissed as periphery characters. The focus is the boys.

While I admit the loving detail given to the dirt bike race course and the riding tricks the boys perform kind of lost me, I am not the target audience. The only issue I had with the story line was the narrators assumption that everyone would be going to college when they reached 18, even his moronic stepbrothers. But this is a really trivial issue when the safety of the world is at stake, in danger from the flying mutant zombie rats of the book's title.

And I need to give a special shout out to the illustrator, Elayne Griffith, as the little cartoons at the beginning of each chapter are simply wonderful and very Simpson-esque. Love them!

Time for the kids to save the world! If my own boys were still this age, this would be in their summer reading pile for sure.