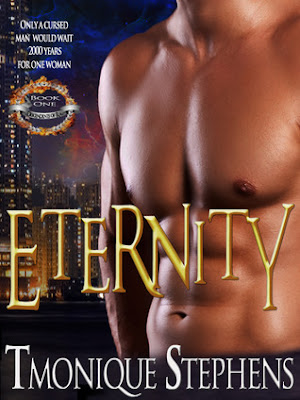 ROMAN NICOLIS Cursed for 2,000 years, he has tracked his lover's soul through each reincarnation only to lose her horribly every time. Reclaiming their love is their only salvation. He's been her friend, her father, her neighbor, but never again her lover ... until now.

STELLA WALKER A late night walk home throws her into the path of a killer. The last thing she remembers are the deep blue eyes of the man trying to kill her-and the first things she sees after a seven-day coma are the same blue eyes in the handsome face of the man hired to protect her. Is he truly the owner of a security firm assigned to protect her, or the man who wants to finish her off? Is it fear she feels when Roman touches her, or the memory of something sweeter? Past secrets haunt them. An angry demon stalks them. Roman will do anything to recover what they had.

Though Stella's ruined childhood has made her close her heart and body to any man, he must get past the walls around her to gain her love and trust, for it will take their union to defeat an unexpected enemy sent from the Egyptian Gods. A man Romans respects, and Stella trusts.

TWO HEARTS, ONE SOUL, FOR ALL Eternity.

Fast paced and filled with sizzling action both in and out of the bedroom, this paranormal thrill ride will keep you turning pages at breakneck speed. Some of the Egyptian mythology was hard to follow, but the idea of doomed eternal love kept me rooting for a happy ending between two deserving characters. I loved the main character's arc as she learned to take control of her life and her destiny. The bad guy was truly evil, but the supernatural twists made him even scarier.

Despite the dangling questions left unanswered in this first book of the series, the story comes full circle and reaches a satisfying conclusion. An engaging storyline and characters, but 3.5 stars for editing issues.
Posted by Katie O'Sullivan at 5:00 AM