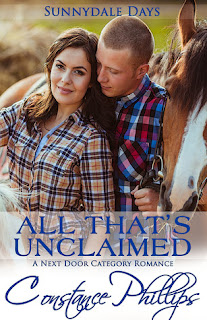 Ben Crawford is forced to face the ghosts of his past after his mother’s accident and Anna Jenkins’s announcement she’s starting her own stables. Only then does he find the strength to hold on to all he’s left unclaimed.***
Ben Crawford has always believed the professional respect and acceptance he desired couldn’t be found at Sunnydale Farms. There were just too many ghosts residing in his broken home. Only when Anna Jenkins, the one constant at his mother’s therapeutic riding facility, announces she is leaving to start her own stables is Ben forced to grasp hold of all he’s left unclaimed.

Constance Phillips writes with heart and longing, a wonderful combination in a sweet, small town romance. I love the way she lets us know the characters, their emotions, their dreams, and their fears, as if the reader is part of the same small town circle of friends.

We met Anna Jenkins in the first book of this series, as the sister of one of the main characters. She's worked at Sunnydale Farms since she was a teen in love with horses, and is now a riding instructor in their hippotherapy program while also doing a little bit of everything to keep the farm running. In  All That's Unspoken, Anna was blamed for the death of a horse and realized how tenuous her situation could be, placing her dreams for the future at the whims of her employer. She decided she needs to be her own boss and own her own farm and riding program. She just didnt count on Ben Crawford finally coming home.

Ben Crawford is the son of Sunnydale Farm's owner and matriarch, and has a serious chip on his shoulder. His father left to follow the rodeo circuit when Ben was young, leaving him and his mother to tend the farm alone and make ends meet. It was his idea to take the farm from merely training and stabling horses to being a certified hippotherapy center, but he feels like he will never have the respect and recognition he craves from his mom...and his father, who's back in town with his new family.

Ben is home now with his Masters in therapeutic riding techniques and training, and noticing that Anna has grown up in the time he's been away. He doesn't know she's always had a secret crush on him, nor does he realize she's planning on buying her own place and leaving Sunnydale, now that he's back to help his mom.

Sparks fly with their very first kiss, but both Ben and Anna are afraid to claim what they truly desire, not just in their relationship with each other but with their hopes and dreams for the future.

Of the three books in the series, Anna is my favorite heroine, but Ben is my least favorite hero because he is a little too caught up in his own head, busy being a little too selfish in his insecurity. He seems younger and more unsure of himself than he should be, given his age and his academic accomplishments, but his story arc into claiming his dream is all the more satisfying.

This sweet romance is the second book in the series, but can easily be read and enjoyed as a standalone. All three books leave everything but a few kisses firmly behind closed doors, well off the pages, and the ever present horses in this story make it a great fit for horse-obsessed teens as well as older fans of sweet romance. Constance Phillips is a wonderful storyteller, and knows how to write a satisfying happily ever after. 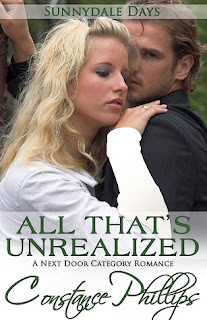 
It’s what the doctor ordered for Rhonda Gables, owner of three successful boutiques: four weeks of rest between winning this season’s Retail Project and claiming her prize. Rhonda must decide if being a TV reality show star is worth leaving behind her loved ones, including the increasingly appealing Trevor Collins.
***

In a month, fashion mogul and reality TV judge Conrad Ryse, of The Retail Project fame, has promised to take Rhonda Gables under his wing and invest in her fledgling career. That’s her grand prize after a winning season on his show. Too bad exhaustion has sent Rhonda out of her city apartment, away from her three successful boutiques, and into her cousin’s guest room for a month of recuperation in her hometown.

She’s on the cusp of everything she’s ever wanted, but what will it cost? Doctor’s orders be damned, she balks at first. But soon Rhonda is both delighted and disconcerted by the attentions of her friend-maybe-lover, Trevor Collins, and the contentment she is surrounded by back home. She must realize all she’s willing to compromise and all her heart truly desires.

Rhonda Gables just finished a grueling season as a contestant on a fashion reality show-- and won! Bright lights, big city fame and fortune -- all the things shes always dreamed of are right within her grasp. She has one month  to design runway-worthy dresses for the final test: if she passes, she'll be offered a job as a designer for an exclusive label, otherwise she merely takes home the cash prize. Obviously, career-driven Rhonda is going for the job, burning the candle at both ends until severe exhaustion lands her in the hospital.

The doctor insists she take a few weeks to recuperate, and she ends up staying with her cousin Hailey, back in her little hometown where life is slower paced but no less complicated. She realizes her feelings for her friend Trevor Collins are more than platonic, and it scares her. She doesn't want to be trapped in her hometown when the New York fashion world is finally within her reach. But being forced to slow down her whirlwind pace also forces her to take a closer look at what's important in life, and at the way true success should be defined.

Trevor is caring, sexy, and has a little plot line of his own regarding his own work/life choices, but this is really Rhonda's story. She's the one who needs to take a deep breath and realize what it is that makes her truly happy, and what she wants out of life. I love the way the author lets her characters go through their thought and growth processes in a natural way, including the insecurities each feels at taking the plunge into a new relationship.

This is a short and sweet romance, with all but the briefest of kisses happening behind firmly closed doors. The POV alternates between Rhonda and Trevor, and it's interesting to see how insecure each of them feels despite all outward appearances of confidence. Watching them each conquer certain insecurities is wonderful, and I love the way the author wraps up the ending. HEA all the way, and I loved it.

This book is part of a series and has characters that have been introduced (and featured) in other books. All That's Unrealized stands on its own and can be fully enjoyed just fine with or without the other stories, and makes for a sweet afternoon of reading by the pool.

...and while you're at it, get the first book in the series
ALL THAT'S UNSPOKEN