MONDAY BOOK REVIEW: MAP TO THE STARS, by Jen Malone #YA 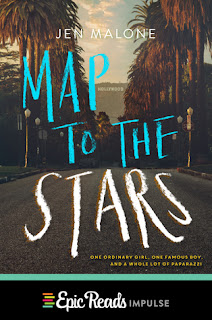 Map to the Stars, by Jen MalonePublished 2015 by Epic Reads Impulse, an imprint of Harper Collins


Author Jen Malone draws on her real-life experiences as a movie studio publicist to bring you an insider peek at love, Hollywood-style.

The California dream was supposed to give seventeen-year-old Annie Shelton a fresh start far removed from her dad’s unusual betrayal. But when things don’t go according to plan in La La Land, Annie’s mom snags a last-minute gig as makeup artist to a teen movie idol and finagles a spot for her daughter on his European promotional tour.

Down-to-earth Annie would rather fangirl architectural sights than an arrogant A-lister. That is, until behind-the-scenes Graham Cabot turns out to be more sweetly vulnerable than she could have imagined.

Too bad falling for a poster boy isn’t all red carpets and star treatment, especially when you factor in obnoxious fans, an overprotective assistant, a stage mom/manager, and a beefy bodyguard.

What a fun contemporary YA romance! Yes, the premise of the movie star falling for the nobody narrator is a cliche at this point, but Jen Malone does it so well, and adds such realistic details that it made it such fun to read! The first person POV is both fresh and refreshing as her small town heroine gets her first taste of Hollywood, making a mess of things along the way.

Annie Shelton grew up in Georgia, so far from the bright lights of LA that she was never interested in tabloid gossip or crushing on hot movie stars. Her best friend Wynn was the total opposite and a great counterpoint to Annie's hard focus on reality. When Annie and her mom move out to California, its not to pursue dreams, but to escape the reality of her father's deception.

Graham Cabot grew up in LA-LA-land, on screen from an early age, and now a genuine movie star at seventeen. Girls throw themselves at him all the time, but the real Graham is actually a little shy and insecure. He admits to Annie that he's never had a real girlfriend, hasn't even had real friends since his elementary school years, before the fame and fortune changed his life.

Their budding relationship is cute and sweet, and the one-POV storytelling has the reader riding along with Annie's confusion at Graham's shifting attitudes and emotions. I won't give away any more of the story except to say the ending is totally satisfying and everything worked out the way I wanted it to.  This is a standalone read, no series or setup for the next book, which I also found refreshing. Quick, satisfying contemporary YA romance of first love and self discovery that I can totally recommend!


Get it on Amazon HERE
Posted by Katie O'Sullivan at 4:00 AM