Candy Hearts Romance reviews: BE MY LOVE by J.C. McKenzie 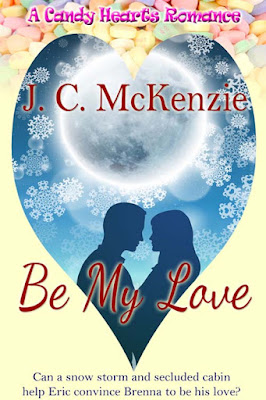 Broken-hearted and bitter, Brenna Jones plans to spend Valentine’s weekend at her parents’ cabin, reading romance novels and devouring heart-shaped candy. When her truck hits a snowdrift and plows into a bank—during a storm, no less—her plans take a drastic detour. Eric Buchanan, the playboy jerk from her past, comes to her aid. He’s her only option for reaching safety.

Eric can’t wait to escape his parents’ latest attempt to set him up. He’s given up on happiness, knowing he blew his chance at love a decade ago. When his snowmobile ride turns into a harrying escape from a blizzard, he discovers Brenna stranded in the storm. After he ensures her safety, he plans to explain the misunderstanding that tore them apart. Can a secluded cabin help Eric convince Brenna to be his love?

Candlelight probably wasn’t a great idea. It wouldn’t exactly dampen the growing tension in the cabin, but at least it would distract her from the near-naked man a few feet away.
After searching a few drawers, she found the matches. She milled around, lighting candles and placing them in the kitchen and living room. The soft light flooded the room, adding shadows and the soft fragrance of vanilla. She didn’t use all of them. The candles and flashlight batteries needed to last. They might be holed up here for days.
Days.
Alone with Eric Buchanan in a candle-lit, secluded cabin.
Another deep breath.
She switched off the flashlight and turned to Eric. He sat in front of the fire, leaning back and supporting himself with his arms. The light from the roaring fire licked his chest and highlighted his well-defined abs.
As if he sensed the weight of her attention, he turned and his green gaze locked with hers. Images overtook her mind—their naked bodies entangled in the dancing light of the fire, his hard body pressed against hers, Eric leaning back wearing the same content expression he wore now as she straddled him.
A little devil popped up on her shoulder. You could have that.

J.C. McKenzie is one of my favorite new paranormal authors, but I wasn't sure what to expect from this straight contemporary romance, with nary a shifter or vamp in sight. I shouldn't have doubted her prowess with words, and loved every minute of this sweet and steamy Valentines romance. The characters are real, the emotions run deep and the sexual tension sizzles off the page.

Brenna and Eric end up stuck in her family's remote cabin during a blizzard. Childhood friends, they had a falling out in high school which Eric has regretted ever since. This seems like the perfect time to set the record straight, if only she didn't hate him so much. Or maybe she doesn't hate him as much as she thinks she does.

I love stories of second chances, and loved every minute of this Valentines tale. While I'm eagerly awaiting the next installment of the author's shifter series, this made for a wonderfully satisfying treat. 5 candy hearts for this heart-warming story!