Monday Book Review: HEART OF THE SECRET by Jody Kessler 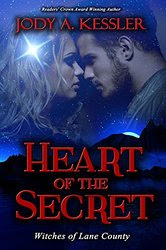 
A 500 year-old curse, a witch who will do anything to marry her one true love, and the heart of a secret that will either divide them or bring them together…forever.

Aspen Morgan is an extraordinary, beautiful, and talented witch with the power to control animals and earth magic. She also deeply desires to marry Rook Avesbury. Unfortunately, Aspen knows that being a Morgan means she is destined to a life of solitude. The Morgans of Lane County don’t get married, they don’t explain why, and their secret always dies with them.

While studying the stars along the northwest coast, Rook, a handsome and charming wizard from the British Isles, falls in love with the captivating Aspen Morgan. After seven blissful months together, Rook is ready to spend forever with her.

Will the Morgan family curse be the end of Rook and Aspen, or will she find a way to reveal the deadly secrets of an enchanted journal and break the five hundred-year-old spell that is preventing their happily ever after?

My Take:
This novella originally appeared in an anthology entitled Magical Weddings, and is now available as a stand alone story. I enjoyed it then, and just bought and re-read it again, appreciating it even more.

Told in first person by Aspen Morgan, the author unfolds a tale of magical curses and redemption through true love. Our narrator is a witch from an old and powerful magick-wielding family with a 500-year old curse placed by a bitter woman. None of the Morgan women are allowed to fall in love or get married, lest the curse kill their love.

But Aspen is of course in love with a warlock named Rook Avesbury. She decides she needs to break up with him before the curse kills him, but quickly realizes it's impossible to stop loving him. Instead, she tries to break the curse for good.

The author does a nice job of blending old and new, magick and mundane, to create a story filled with emotion and heart, and just the right touch of suspense. If you like your romance with angst and magick, try this sweet novella. I'm totally hoping for more about the Morgan family of witches, may be in a longer form novel (hint, hint, Ms. Kessler.)

About the Author:
Jody A. Kessler's debut novel, Death Lies Between Us, is the winner of RomCon's Readers' Crown award for best Paranormal Romance & a finalist for Best First Book in 2014. She is the author of The Night Medicine, a historical time travel series set in the Blackfoot Nation during the 1860's. Jody is currently working on her new Granite Lake Romance series as well as other exciting projects.

When Jody isn't navigating the terrain of her imagination and writing it down, she can be found exploring the wilderness of Colorado with her family, or in the kitchen baking cookies & brownies - and trying not to eat them all. She's passionate about continuing to learn and reads anything and everything that catches her interest. Jody is a full time mom, a Reiki Master, and has taught Hatha yoga for over a decade.

She invites you to stop by her website and see what's new at: www.JodyAKessler.com