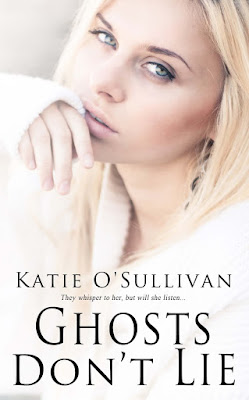 So I read on an industry blog recently that ghosts and psychics were hot in fiction right now. Which sounds good for my last release, GHOSTS DON'T LIE, except that I haven't done sufficient promotion for this poor baby. It released in November, but that was around the time my middle child started freaking out about college applications and acceptances... and my writing life took a back seat to my family life.

This fall, he's headed off to the college of his choice and I have several events set up to celebrate my "new" paranormal psychic suspense, and talk to readers about ghosts and the paranormal. I've teamed up with Kathryn Knight who just released HAUNTED SOULS to do several library presentations during October, the perfect time for ghosts and ghouls!

In the meantime, I'm sharing an excerpt and a weekend contest. Leave a comment about whether you believe in ghosts and why, and one lucky reader will be chosen on Monday to win an ecopy of my book!


Jillian Rogers Greene worked hard to close the doors on the psychic abilities that defined her youth. For years she pretended to be normal, ignoring the ghosts who whisper to her. When a car crash sets her on a collision course with the past, ugly secrets about her family and marriage come to light. She's forced to reevaluate what she thought she knew...and exactly what the future holds.

Connor Sanderson might be the key to unlocking that future. The grey-eyed artist knows ghosts aren’t real, but his attraction to the beautiful psychic makes him question those beliefs. With her husband plotting to kill her, can Jillian make Connor see the truth before it’s too late?


The first weak rays of the sunrise struggled in through her bedroom window playing over her closed lids. Lying in bed, she thought about the girl in braids that she used to be, the one who communicated with the deceased loved ones of her mother’s paying customers.

The kid no one wanted to let their own children play with because she was “different.” The kid who got teased for being a “ghost girl.”

She and Parker were friends for years before he finally got up the courage to ask her about it one day in sixth grade. “What’s it like? Talking to dead people?”

Lunch recess was half over. They sat against the brick wall on the far edge of the playground, watching their classmates play kickball. Jillian shrugged, flipping her braids behind her back. She picked distractedly at the long grass they were sitting in. “It’s okay, I guess. Mom says I owe it to people to use my gift to help them.”

“Mostly I see their auras. Glimmerings of color. And their smells. Did you know everyone has a unique scent that follows them into the next world?”

Parker shook his head, hanging on her every word.

“Sometimes I see their faces,” she continued. “I can almost always see my grandmother, like she’s still alive and sitting with me, but sometimes she’s a twinkling of silver light. And of course I can hear what the ghosts tell me, what they need to tell their families.”

“Not cool. I’m only eleven and here are all these dead people, wanting something from me. Needing me to help them.”