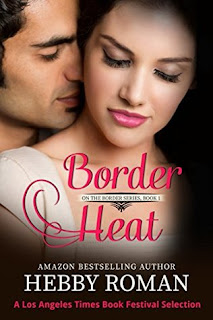 Border Heat, by Hebby Roman
Published May 2016 by Estrella Publishing


Leticia Rodríguez is a business woman and an advocate for divorced mothers seeking children support. Despite all her accomplishments, she hasn’t recovered from her failed marriage and losing both her parents in a freak accident. The last thing she wants is a sexy Latino attorney pursuing her.

Eduardo Villarreal has two law degrees, one from the States and the other from México. He’s a self-made man and an expert in international law, but like Leticia, his personal life has suffered… the loss of his unborn child, a divorce, and the passing of his mother. And when he learns about the father who betrayed him, he hardens his heart to love… wanting only revenge.

Despite their pasts, Leticia and Eduardo begin an affair. But when she discovers his political ambitions are fueled by vengeance, she realizes he has no room in his heart for love… or her.

This is a quiet story of second chances, filled with slow-building sexual tension, drama built out of misunderstandings, small town sensibilities, and emotional yearning that transcend borders.

Leticia lives in a small Texas border town, having dropped out of college to run her parents furniture store after their sudden deaths. Despite the daily struggle to compete with the chain stores, she also finds time to volunteer to help single moms track down their deadbeat husbands. It's in pursuit of this goal that she meets Eduardo, a lawyer from the Mexican side of the border who agrees to help track down the men running away from their child support obligations.

Sparks fly when the pair first meet, but both have been burned before. Each was previously married and dumped by their spouse, and each fears repeating past mistakes or letting anyone get too close. The author gives us alternating points of view from both Leticia and Eduardo, so the reader is privy to the inner fears and secrets they keep from one another.  The author also flavors the story with Spanish words and phrases, mixing them liberally into the dialogue in a way that made the story's setting feel more authentic.

Ms. Roman does a masterful job of painting two broken people both yearning and fearing that second chance at love. I loved the growth of Leticia's character, as she shed her cocoon and spread her wings, realizing her own inner strength and desires, and standing up for what she believed in.