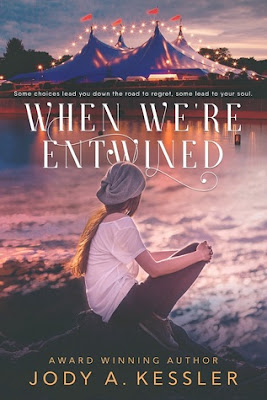 
Do not judge me for where I stand today, until you know how far I’ve traveled to get here.” — J. Pyrah, When We’re Entwined

Former circus performer and aerial gymnast, Tara knows it’s time to move on. Tired of the constant abuse and the emotional rollercoaster ride at home, she takes to the road to perform on stage with her boyfriend and his band, Paradox 21.

Drunken excursions and late night after-parties lead to an unfathomable betrayal by her boyfriend, Keel. Tara never imagined her summer tour would come to an abrupt end that lands her jobless, homeless, and broke in a city far from home. Unable to reach out to her emotionally distant and unstable mother and her abusive stepfather, a knight disguised as a homeless man gives Tara new perspective. And a punk named Corban, with his gemstone inspired eyes, takes her on a spontaneous road trip that ultimately lands her a job with the traveling sideshow, The Circus of Misfit Marvels.

As Tara searches for a freedom she has never known, she documents her journey by writing her most embarrassing, profound, excruciating, and soul-searching moments in letters to her sister. Despite heartache, love and loss, Tara finds immeasurable strength and wisdom during her travels in this unforgettable adventure of self-discovery.

“When We’re Entwined is a gripping, emotional modern-day adventure with a glimpse of alternative lifestyles in America as one vibrant, young aerial gymnast realizes cruelty and injustice can be outweighed by kindness, humor, and compassion with the help of a most unlikely and wildly colorful cast of characters.”

A fast paced, coming of age novel, WHEN WE'RE ENTWINED takes the reader on a twisting journey of self discovery and introspection as the main character tries to navigate the road to adulthood through the land mines of her past.

Jasper Pyrah grew up as a circus performer until her mother remarried and they left the circus life.  Now 19, she's running away, striking out on her own to get away from her abusive stepdad. Told from Jasper's first person POV, her story unfolds in fits and starts, each bit of backstory filling a hole in the puzzle of her life as she examines each piece and figures out where it fits. Her landscape is filled with interesting and strange characters who move in and out of Jasper's life, each with their own unique wisdom to impart.

I've read several books by Ms. Kessler, and loved them all for different reasons, but they all have a similar thread of broken characters trying to find their places in the world. As she matures as an author, Ms. Kessler's voice only grows stronger and more pronounced, and I'm totally looking forward to reading more from her in the future.