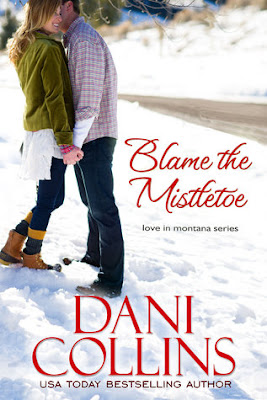 
Liz Flowers has never enjoyed Christmas, but this one is shaping up to be the worst by far. She let her ex take her daughter to Mexico while she stays behind in a strange town, sitting her former mother-in-law’s high strung little dog. It’s an opportunity to meet new people, but this California girl doesn’t have much in common with the ranchers in small town Marietta.

Blake Canon perks up with male interest when he sees a new face at his friend’s Christmas cocktail party. His son is away and a light affair would take his mind off his financial troubles. Then he realizes he knows Liz. She was once married to the brother of his ex-wife.

Their children might be cousins, but Blake and Liz do the kissing—under the mistletoe. It’s the beginning of a new view of Christmas for Liz, but when their children arrive home unexpectedly, and family secrets are revealed, Liz isn’t sure she’ll stay in Marietta for Christmas after all.

MY TAKE:
I don't usually like coming into a series in Book Two, but being a Christmas story I gave it a whirl, and found it works well as a stand-alone. I might not have gotten the depth of context of some of the secondary characters,  but for the purposes of this story everything was well laid out.

I absolutely loved this cover art and was completely drawn in. Okay, I found it a bit odd that in-laws knew so little of one another, but living in different states and her divorce following on the heels of his marriage, they only "knew" each other peripherally. I also found Liz's character a bit inconsistent at times, with how strong she was, what a good business woman she was, and how she let her ex walk all over her both during the marriage and after.

Those objections out of the way, I thoroughly enjoyed the idea of Liz hating Christmas and Blake making it his mission to change her mind about the season. And the heat between them is sizzling. (Which is the other reason why it's so hard to imagine that if they'd met at a family event, they wouldn't have already felt the connection between them.) Alternating points of view keep us up to speed on how each of the characters is dealing with the hurdles of dating in a small town, where everyone knows your past - and your ex-inlaws.

Well written, nicely paced story of finding new love and peace in the Christmas season. Grab your copy on Amazon for a holiday smile. (As of this writing, the Kindle version is free.)

Jingle All the Way, by Becca Dale
Published November 2010 by The Wild Rose Press


Single mother Jenica Anderson keeps small town boys at bay and happy without effort but has no clue how to handle a blue-eyed stranger with a wolfish stare and sensual demands that break all her rules. She only knows that for at least one night, she’ll beg him for exactly what she wants for Christmas.

When a snow storm diverts his plane, Burk Teal lands in Keaton, ND and in the arms of a gorgeous redhead who offers him a glimpse of what home and hearth are all about. As she writhes beneath his hands, he finds precisely what he has been looking for in Santa’s frozen backyard.

Sparks fly immediately between these two, but can physical attraction survive harsh reality or will memories of hot sex and the sound of jingle bells fade to nothing more than a decadent episode that happened one Christmas?

This novella is short and sizzling, starting with a bang and filling in the plot after. There are an awful lot of Christmas stories by the exact same name, and somehow this little naughty novella seems completely lost, with no reviews on Amazon and only 3 on Goodreads.

It's not very realistic, but the sex is hot and steamy, and once the characters were given outlines and context I found them likeable as well. If you're looking for a complete escape from the holiday madness for an hour or so, give this a whirl. At $1.99 for the Kindle version, it's as affordable as those gingerbread men and satisfying in a whole different way.