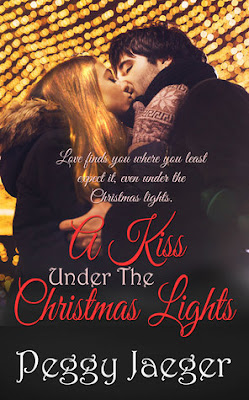 
With Christmas just a few weeks away, Gia San Valentino, the baby in her large, loud, and loving Italian family, yearns for a life and home of her own with a husband and bambini she can love and spoil. The single scene doesn’t interest her, and the men her well-meaning family introduce her to aren’t exactly the happily-ever-after kind.

Tim Santini believes he’s finally found the woman for him, but Gia will take some convincing she’s that girl. A misunderstanding has her thinking he’s something he’s not.
Can a kiss stolen under the Christmas lights persuade her to spend the rest of her life with him?

I absolutely adore Peggy Jaeger's Valentine novella about Chloe San Valentino and her large, meddling Italian family, so when I found out there was a Christmas story about Chloe's younger sister Gia, I snatched up a Kindle version to sweeten my holiday season. (Read my review of 3 Wishes, a Candy Hearts novella HERE.)

Gia San Valentino is the baby of the family, a good Italian girl in her early twenties still living at home with her overprotective family. In the lead up to the holidays she's crazy busy with studying for her CPA exams while helping care for her elderly grandmother and helping out with her family's booth at the annual church Christmas festival.

Her well meaning family has set her up with numerous dates, but none of them make her heart stop like the new soon-to-be-ordained priest at her local church. She's more than convinced she's going to go to hell for having such carnal thoughts about a man of the cloth, and that's before he even kisses her. After? She can't think straight, let alone care. One kiss will never be enough.

This over-the-top New York Italian family makes for such fun reading, especially having grown up in Northern New Jersey with so many Soprano-like neighbors. Jaeger nails lots of the little details that make you both cringe and laugh out loud, and despite the fact that I figured out the story's "twist" well before Gia did, it only added to the fun to watch her emotional turmoil.

For a different sort of Christmas story that will definitely make you smile, grab a copy of this fun, fast read. You won't be disappointed! Grab it on AMAZON today. 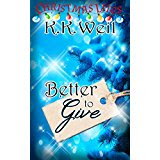 Better to Give, by K.K.Weil
Published November 2016 by The Wild Rose Press


For most people, the holidays are a time of warmth, happiness and celebration. But to Jenna Samuels, they mean only one thing. Mounting debt. A single mother, Jenna struggles to make ends meet and to her, it’s a season of excess and distress.

James Garrison is in over his head, too. His ex-wife said he wasn’t equipped to take care of his twins, and now that he’s got joint custody, he fears she was right. They’re wild, spoiled, and always fighting. When they knock Jenna’s daughter into the “Gifting Tree,”—a part of their town’s charity collection—the parents are immediately attracted to each other. But James has had his fill of cold women and Jenna won’t make the mistake of falling for another man who disappears when life gets too heavy.

As their paths cross, James and Jenna must decide whether first impressions are accurate, or if sometimes, people are not what you assume at all.

After reading and reviewing several older Christmas romances, I thought I'd buy a few brand new ones. This was my first purchase and I was not disappointed.

Told all in first person POV, the chapters alternate between the two main characters. Where some he said/she said narratives give us the same scenes in different views, the author here does a great job of showing us how both characters feel during each scene, keeping the plot moving along quickly through the month of December as the holidays heat up.

Jenna is a single mom of one little girl, with a baby-daddy who left before Nora was born and parents who disowned her for choosing to drop out of college at 19 and keep the baby. She's been going it alone for so long she's not quite sure how to let someone else in, using a wall of sarcasm to keep men away.

James is a recently divorced dad of rambunctious twins. He had to sue his bitter ex-wife for a formal joint custody arrangement in order to spend time with his kids. He doesn't want to waste his few nights a week laying down the law and as a result they act like brats. When a stranger (Jenna) calls him on it, his eyes open to the possibility that he's approaching his parenting responsibilities the wrong way. He also opens to the possibility that not all women are bitter manipulators like his ex.

An innocent dinner with all their kids leads to sparks, and things progress quickly. This is a fast, fun read (albeit too short) where both characters learn and grow as they fall in love. The HEA on Christmas night ties a bow on this sweet holiday story and left a lingering smile on my face.

Grab your copy and your holiday smile for only $2.99 on AMAZON.

Posted by Katie O'Sullivan at 7:55 AM