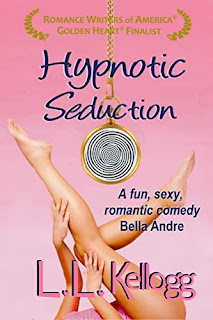 She has a problem relaxing with men

Frumpy wallflower Hannah Oliver is nearly thirty and has a serious self-image problem. Growing up in her centerfold mother’s shadow and being raised by her pious grandparents has left her so self-conscious about her matronly, D-cup figure she gets tongue-tied around good-looking guys. So when Hannah discovers her fiancé/employer boinking her roommate, she’s not only devastated—she’s unemployed.

He’s got a problem fending off women

Pharmaceutical CEO Jordan Calder has a huge image problem too—his professional image. Most guys would kill to be publicly proclaimed a world-class lover, but other men don’t share his dark, shameful past. The only thing women have ever wanted Jordan for is what he can give them in and out of bed. So when his grandfather drags dowdy Hannah into his office as an executive assistant candidate, Jordan hires the mousey woman on the spot.

Could hypnosis be a solution?

After miraculously landing her plum new position, sexually frustrated Hannah resorts to hypnosis to boost her self-confidence with men, hoping to attract another mate. Unfortunately, a post-hypnotic suggestion compels her to kiss her sexy playboy boss who she then stupidly falls for—in and out of bed. Despair induces her to use similar hypnotic principles on him—in the form of subliminal messages—to convince the man she loves that he wants a happy-ever-after with her. But as everyone knows, desperate measures and deception usually spell disaster.

Okay, I know this was a Golden Heart finalist. (Actually, I didn't know that until I just grabbed that info to put together this review. I would never have guessed.) I do understand that Ms. Kellogg is a very successful romance author. And she even has a blurb from the Queen of Romance, Bella Andre. And yes, I read the whole book.

But let me just say, this is one hot mess of a story.

The characters were inconsistent in their actions and the moving forward/pulling back started to make me feel like a yo-yo being yanked around. I think the characters were a little too old to be acting so irresponsibly, but they needed to be that old in order to have the business experience and positions they held. The dialogue was inconsistent as well, jumping from normal to overly familiar to what I think the author meant as teasing or sassy but sometimes came off as pretty rude.

Hannah's character is sweet throughout, but the idea of going from embarrassed by her own sexuality to naked on the hood of a car so quickly is a stretch. I also felt like her backstory was a little over the top as to her inability to climax. Jordan's character was most inconsistent, with too many complicating factors in his backstory, and far too many inconsistencies in his present behaviors. And if he told himself how much he didn't deserve Hannah one more time I felt like I would rip my ereader apart.

I liked the general storyline and plot, but the execution was sloppy and repetitive, with some of the scenes feeling drawn out for the sake of adding to the ultimate word count. I really wanted to like this story more, but the description "hot mess" kept circling my brain regarding more than one scene. As an author who struggles with some of the same issues, I totally commiserate, but this felt more like a first draft than a finished work from a bestselling author, which left me wondering how it has so many good reviews.

This is part of a 3-book series, but I'm afraid I won't be reading the next few. I know I've read other books by this author in the past, but I'm not sure I'm going to be reading more in the future.

If you want to check out this hot mess yourself, it's currently free on AMAZON, but be warned. The maxim "You get what you pay for" holds often holds true...
Posted by Katie O'Sullivan at 5:04 PM