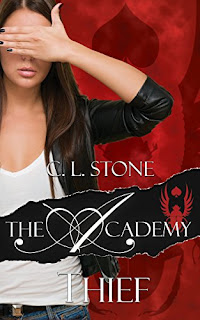 The Academy: Thief, by C.L. Stone
first Published by Arcato Publishing in 2014
(part of a 5-book series, that follows her first Academy 10 book series)


From USA TODAY Bestselling Author, C. L. Stone, read Thief, the first book in The Academy Scarab Beetle Series.
Kayli Winchester is a dirt-poor girl living out of a hotel, forced to be the parent for a drunken father and teenage brother who she's desperate to keep in school. The only way she scrapes by is to utilize her one skill: pickpocketing. But even though she's a thief she has a moral code: no kids or old ladies, only targets who can defend themselves. Not that they see her coming...

Thinking she's been working under the radar, Kayli has no idea The Academy has been watching and taking notice. Now a team that needs her skill has offered her a way out of her predicament and it's her last chance: work with them, or face jail time. Kayli resists at first, but slowly the boys reveal they can be trusted. With Marc, the straight man, Raven, the bad-boy Russian, Corey and Brandon the twins as different as night and day, and Axel their stoic leader, there's a lot Kayli can learn from these Academy guys about living on the edge of the law. If only she can stay on the good side instead of the bad.

Especially when the job they offer her is more than any of them bargained for. After it's done, the hunters have become the hunted and their target is now after Kayli. The Academy boys do their best to keep her hidden, but a thief like Kayli will never sit still for long.

Meet an all-new Academy team in Thief, the beginning of the Scarab Beetle series.

Warning: This is a new adult series. Readers of the other Academy series may need some caution as this series will contain mature sexual and violent situations and themes.

While I applaud Ms. Stone for giving us a strong female lead, this heroine is not a smart person nor a good role model. She makes bad choices and others pay for her impulsive, irrational actions.

Wow, that sounds like I'm an old fart, doesn't it?

I didn't like this book. I read the whole thing, and the writing itself is fine. Grammatically correct, properly punctuated, good sentence structure, fast-paced dialogue and plot line. It's just....

I didn't like this book. She's a USA Today best selling author with her previous (and related) series. So how did she get it so wrong? How did her heroine end up such an unsympathetic, unlikeable character? It's not just the bad choices the heroine makes either - Ms. Stone makes enough bad choices that the book is ultimately unsatisfying. And almost makes me want to read the next one to see if anyone redeems themselves or some of the (too many) romantic plot threads untangle themselves.

But I'm not going to.

This is actually the second review I've sat down to write about this book. The first devolved into a teaching rant about romance structure so I'm going to post that for my Writing Wednesday rant instead. For now, I think this is all I'm gonna say. If I had to give this a star rating, I might say 2 - one as an acknowledgment that the author sat down and wrote an entire book. The second for, as I mentioned, being well versed in the craft of writing and getting all the details of the art form correct, at least enough so that I could finish reading the entire book without hurting my eyes or my brain.

But a third star would indicate I liked it. I didn't. A fourth star would indicate that I thought other people might like it too. Which I don't, even though there are plenty of 4 and 5 star reviews on Amazon. A fifth star would tell you that I Loved this book, yes, the Big L, and that I was talking about it outside of reviews, recommending it to anyone who listens to me, you know, my neighbors, the people at the grocery store, friends at cocktail parties, the guy on the midnight shift at 7-11...

That's how my stars work. I should probably put that somewhere official, but I just wrote it out for the first time myself. Huh. Well, I'll get to that. For now, yeah, 2 stars. Not recommended. Tune in Wednesday for a more complete rant.
Posted by Katie O'Sullivan at 5:59 AM