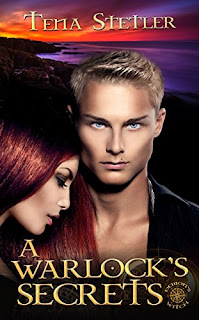 
Years ago, a sacred ceremony at the Dragon’s Moon Coven turned deadly. Son of the high priestess, Tristian Shandie’s life changed forever. With a price on his head and revenge in his heart, he has no choice but to follow in his father’s footsteps to a profession shrouded in secrets. Now his skills as an enforcer for the Demon Overlord are second to none. But dangerous secrets he harbors are a liability he can no longer afford.

A chance meeting with a woman he finds irresistible flips Tristian’s world upside down. Hannah is a cyber security specialist with secrets of her own. Bad boys never appealed to her until Tristian, who changes everything. In his darkest hours, she is dragged into his magical world.

If they survive, is she strong enough to heal his heart and tame the warlock? Or will their secrets destroy them?

A Warlock's Secrets not only takes us back into the world and characters Tena Stetler created in A Demon's Witch, but also overlaps with that first story from a different perspective. This second book of the series can stand alone, but if you want the full picture, I'd recommend reading the first book as well.

The warlock from the title is Tristian Shandie,  the dangerous and mysterious older brother of Angie, the witch from Ms. Stetler's first title. Their parents were murdered when they were young, and he's been overprotective of Angie ever since. Between caring for his sister and his stressful job as a magical assassin, he's never had time for a real relationship, nor has he had any inclination.

Tristian is furious when he discovers that his sister is marrying a demon. Not just any demon, mind you, but the Demon Overlord, who also happens to be Tristian's boss. If you read the first book, you know just how angry he is, but you don't know why.

With this story, we find out.

Enter Hannah, who has her own magical secrets. When the two meet by chance the sparks between them fly. Could she be the woman to finally heal the warlock's heart? Will she be able to live with the secrets he's been keeping for so long? When is she ever going to share all of her many secrets with the warlock?

This is the fourth book by Ms. Stetler that I've read, and still find it interesting how normal and everyday she makes the magical world seem. Generally, paranormal stories are more fast-paced and action-packed, eager to make sure you know how out of the ordinary everything is. Which is why some readers don't go for paranormal romance. They want something more relate-able, I guess.

Stetler's witches, demons, fairies and warlocks eat, sleep, laugh and worry just like the rest of us. She weaves the magick in with the mundane as if these magical beings really could be hiding in plain sight among us. The pacing is slow and steady as we follow Tristian's journey of healing his family.

If you're looking for adrenaline-packed fast-paced paranormal, this isn't the book for you. However, if enjoy paranormal romance that gently mixes the magical and the mundane, give this author a try.

Find this book as well as her others on Amazon.