Monday Book Review: A Shot at Love by Peggy Jaeger 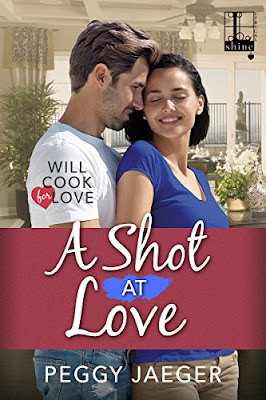 A Shot at Love, by Peggy Jaeger
Publishing October 3, 2017 by Lyrical Shine (A division of Penguin Random House)


Nothing’s impossible when love is on the menu. In Peggy Jaeger’s luscious series, the only thing more tempting than a delicious meal is a truly delectable romance . . .
Look for exclusive recipes in each book!

Photographer Gemma Laine is looking for arresting faces on the streets of Manhattan when her camera captures something shocking—a triple murder. In that moment, she becomes a target for the mob—and a top priority for a very determined, breathtakingly handsome, FBI special agent. With deadlines to meet and photo shoots on her calendar, Gemma chafes at the idea of protection, but every moment she spends under his watchful eye is a temptation to lose herself in his muscular arms . . .

With two of his men and one crucial witness dead, Special Agent Kyros Pappandreos can’t afford to be distracted. But Gemma is dazzling—and her connection to Kandy Laine’s high-profile cooking empire makes her an especially easy mark for some very bad people. Keeping her safe is much more pleasure than business, but as the heat between them starts to sizzle, Ky is set to investigate whether they have a shot at love . . .

Peggy Jaeger's books keep getting better and better, and this latest release is no exception. I absolutely love her writing style, which draws you right into the character's minds and gets you on their side from the very start. While this is the second book in her Will Cook for Love series, it can totally stand on its own and be completely satisfying.

Strong women and sexy alpha men always make for explosive combinations, and the sexual tension between the main characters is through the roof from the very first page. And although Gemma Laine is the sister of famous television and cookbook chef Kandy Laine (whose story is told in the first book of the series, Cooking with Kandy) it's actually the sexy FBI agent Kyros Pappandreos who heats up the kitchen with his mad cooking skills. Is there anything hotter than a guy who sports an 8-pack and can cook like an angel?

Speaking of explosive, Jaeger also raises the action stakes in this story, keeping the reader on the edge with our hero and heroine literally running for their lives, facing gun-toting goons, hand-to-hand combat and death-defying car chases. If you like Marie Force's best-selling Fatal Attraction series, you should totally give this novel a try!

I've always thought of Peggy Jaeger as a master of contemporary romance, but with this new book she adds romantic suspense to her literary résumé and hits it out of the park.


My only beef is again with the cover art. Don't get me wrong, it's a good cover, but like the first book in this Will Cook for Love series, I don't think the cover models do the characters justice. Perhaps I'm being nitpicky...  Gemma's friends nicknamed her "Cleo" short for "Cleopatra" for her straight black hair and iconic straight-across bangs. I don't remember her ever wearing a headband in the story. And Kyros is described more than once as looking like a Greek god sporting a chiseled chin and cheekbones, and mile-wide shoulders and drool-worthy biceps. So while the cover is a nice one, it's not the right one for this book, these characters.


So ignore the cover art and buy this book when it goes on sale tomorrow. Better yet, head over to Amazon today and pre-order a copy so that you can start reading as soon as you get up in the morning! You may be a little late for work... but you won't be disappointed!


Grab it on AMAZON.