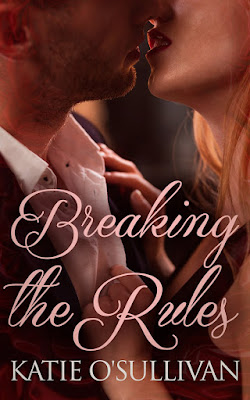 
Jake Campbell hates rules. Undercover to stop a drug ring at a posh Cape Cod resort, he can’t resist the fiery head chef, Abbie Duncan. She may be on the suspect list, but he can’t keep his hands to himself. With a rising body count, he must keep Abbie safe…but can he trust her with his jaded heart?

Jake’s hands rubbed up and down her arms but her shivering continued. He wrapped his arms around her, pressing his hands to her back, breathing in her scent, holding her while she trembled. Long minutes passed as the sun climbed higher, but Jake barely noticed. The fact that time stood still whenever he was near her had no relevance to anything. Yeah, he could keep telling himself that as long as he wanted, but a tiny little voice in his head kept up that persistent whispering, This one. Choose this one.

Finally, the trembling subsided and Abbie’s breathing slowed to match his own.

The awareness between them grew, an electricity passing between their bodies in every spot where they were connected. She tried to pull away, her wide eyes meeting his and displaying both confusion and an underlying need. A need that seemed to match his own. “I’m a mess this morning, sorry.”

“Hey.” He cupped her face, stroking the pads of his thumbs along her soft cheeks until she reluctantly met his stare. “It’s not your fault, Abbie. Stop blaming yourself.” More tears shimmered, making her eyes look impossibly large, like deep green pools. His gaze shifted lower, to where her bottom lip quivered. Unable to stop himself, he dipped his head and pressed his lips softly to hers, just to stop that last tremble, tasting the salt of her tears mingled with the coffee on her breath. Soft and sweet, her mouth yielded to his eagerly.

Abbie pulled her mouth from his, panting for breath, her face flushed. “Jake, we can’t do this.”

“Do what?” He recaptured her lips, not ready to stop, not ready to admit to himself that he shouldn’t be kissing her, shouldn’t be crossing this line for so many reasons he couldn’t even name them all. So sweet, so giving, as if she’d dreamed about this moment as much as he had. Her soft moan sent his heart racing, feeling like he’d gone over the edge of a waterfall with no way to escape the battering rocks below.

When she pulled away again, his lips found her earlobe, nipping, tracing the outer edge with his tongue and feeling her tremble in his arms as she spoke. “Jake, there are rules.” Her eyes were closed, her neck bent to give him better access to that spot on the edge of her jaw, just below her ear.

“I know all about rules,” he whispered, wound so tight he might explode. “Sometimes they’re meant
to be broken.”