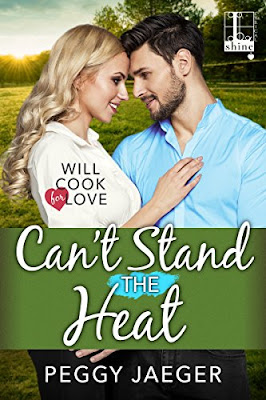 Can't Stand the Heat (Will Cook for Love, Book 3) by Peggy Jaeger
Published April 2018 by Lyrical Shine, a division of Kensington Publishing


In Peggy Jaeger’s delectable series, delicious food is just an appetizer for life’s main course: the kind of love that feeds your soul.

With three successful TV series under her belt, including her cousin Kandy’s, executive producer Stacy Peters is ready to helm her own show. But to make that happen, she has to do her network boss one favor first—spend two months on a ranch in Montana wrangling the notoriously difficult director of Beef Battles. Apparently, he eats producers for breakfast. Yet all Stacy can think when she meets the lean, rugged man is how hungry he makes her . . .

Dominic Stamp—Nikko to his very few friends—has had enough interference from TV newbies. And when Stacy climbs out of the car in Montana, he’s not convinced she’s even old enough to drive, much less produce his show. But he can’t deny that the long-legged blonde with the stubborn will and the dazzling smile whets his appetite. And as Stacy proves her talent with the crew and the budget alike, Nikko vows to prove to her that love is on the menu for both of them . . .

Peggy Jaeger delivers once again, with a captivating contemporary romance full of slow burn chemistry that sizzles off the page. If you haven't read one of Ms. Jaeger's books yet, you're in for a treat! If you're already a fan, Can't Stand the Heat will not disappoint.

First though, can I complain a little about the cover art?

I may be overly picky, but Kensington is a big name publisher, right? I'd like to think that the cover artists try to reflect the characters in the actual story. The blonde on this cover kind of resembles the Stacy in my imagination (except, of course, you can see her forearm, which she Always wears long sleeves, for reasons we discover halfway through the story, so bit of incongruity there.) But the guy? No way. He's not Nikko. First of all, he's supposed to tower over Stacy, not be the same height. And second? He's too young. Just...no.

Okay, rant over. Back to the good stuff - the story. The characters. The lyrical way Ms. Jaeger writes, describing emotions and inner turmoil so precisely that the reader feels it swirling through themselves as well as the characters.

The story takes place in Montana during the hottest part of the summer, where a seasoned television crew has taken over a cattle ranch to film a reality television show titled Beef Battles. The director is a notoriously hotheaded perfectionist who's already fired two executive producers and is already overbudget. The network executives make a deal with Stacy Peters to rein it all in and make it work. She's a young but seasoned food network EP who's already made a name for herself as a miracle worker with fast-paced and/or troubled productions. If she can work her magic with Beef Battles, the network has promised creative control over a show of her own.

Nikko Stamp is an unrepentant perfectionist with control issues dialed to the max, and no time to waste with "babysitters" sent by the network to slow him down or question his vision. He and Stacy get off to quite the rocky start, but she surprises him at every turn by staying calm, cool, and professional, despite his angry outbursts, despite the diva judges, and despite the near constant 100 degree heat of a Montana July. On top of that, the woman pushes buttons he thought had long ago died, making him want things he thinks he doesn't deserve or have time for.

On top of the issues with the show, Nikko's troubled teenage daughter is staying with him on set. It's been two years since her mother died in a car accident where Nikko was driving and also badly injured. It was almost too late when Nikko realized she'd developed an eating disorder as a coping mechanism for the uncertainty and upheaval in her life, and now can't let her out of his sight.

The story has many layers, each so interesting and woven together with the rest like a multi-hued tapestry. I could have happily read a longer version of this book, where more scenes were played out between the minor characters and other storylines pursued more fully. The behind-the-scenes views of the reality cooking show were so much fun, especially where my son and I watch so many of them on cable already. But this isn't just a "reality television" romance. I've read several of those in the past. This one is more.

The main focus of this story is the relationship between Stacy and Nikko. How two broken people with pain and secrets can learn to trust one another, both in a professional capacity as well as personal. How a people-pleaser and an angry hothead can come together to create chemistry that sizzles off the page. How love can heal, if you give it a chance.

Totally recommend this book and this entire series. Grab a copy now on AMAZON