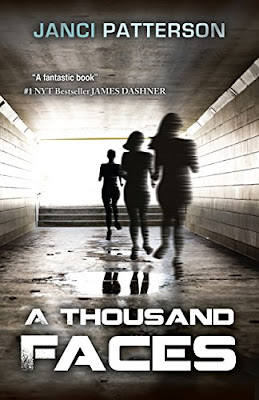 
In her debut YA science fiction novel, Janci Patterson presents a thriller that #1 NYT bestseller James Dashner calls "a fantastic book" and #1 NYT bestseller Brandon Sanderson calls "hands down one of my favorite novels of the year."

In the world of high-stakes espionage, it pays to be able to change your face. And that’s just what sixteen-year-old Jory and her family of shape-shifting spies can do—alter their faces and bodies to look like anyone. Jory is in training to be a full member of the family business—when she can convince her parents to let her help with their elaborate cons.

But when Jory’s parents go missing on the job, Jory is thrown into a world of secrets, lies, and stolen identities that will put all her training to the test. Jory’s always wanted to be a member of the team—

But saving her family may be the most difficult job of all.

Unique and totally absorbing, this YA paranormal deserves a whole lot more recognition than it's received so far.  Author Janci Patterson creates a new kind of human shape shifter - one that doesn't turn into an animal, but rather can change their bodies, faces, and even voices into other people. There have been aliens and robot terminators in books and movies who've had this ability - but a shape shifting race of humans? The concept and the world building the author invests is fascinating and utterly believable.

If you like YA paranormals and enjoy new twists and concepts, you need to read this well-written, well-executed story - the bonus being that it's the first of a three book series, and Book One is currently free, and can totally be enjoyed as a standalone, or as the start to a delicious new series.

As I'm writing this, the Amazon book only has 24 reviews - which probably has more to do with Amazon's new screwed up policing efforts and algorithms than anything else. But that's a story for another blog. Trust me, this book is so much better than many YAs I've read with hundreds more reader reviews. Which proves the point that number of reviews doesn't correlate to quality whatsoever. And that Amazon needs to figure out how to police reviews without blanket deletion.

Anyway. Back to the story.

Jory is a sixteen year old girl who's been learning the "family business" and is eager to take on more responsibility, although her parents aren't sure she's ready. The business? Corporate espionage, and the book starts with her first solo assignment, "breaking into" a high tech company by pretending to be one of the employees. Very Mission Impossible, but without the prosthetics or gadgets, because Jory and her family are shape shifters, who can mimic anyone's body, face and voice.

Shape shifters live in the shadows, staying under the government radar. Their existence is barely hinted at on conspiracy websites, and shifters are cautious about getting caught and ending up in some Area 51 vivisection laboratory. Needless to say, Jory's family moves around a lot. She doesn't attend school or have friends - only one other shifter family that they work with, who happen to have a teenaged son.

Kalif is the first shifter boy Jory has ever known, and he's somewhat of a tech genius. She's developed something of a crush on him, which her parents notice and tease her about. But when her parents don't come home from a routine assignment, Kalif is the only one Jory can trust to help her find out what happened.

Both teens have been somewhat sheltered by their parents, not allowed to participate in higher stakes missions or informed of some of the dangers of their world. Their parents think they're kids, and not ready to handle or execute anything of importance, trying to exclude them from investigating what happened to Jory's parents. Together, Kalif and Jory use their training to search for answers and conduct undercover ops that reveal uncomfortable truths for everyone.

This is a unique coming-of-age novel, told exclusively in Jory's first person point of view. The first-love romance between Jory and Kalif is sweet (nothing beyond kisses and hugs, and a growing attachment.) I think the book is misclassified as science fiction and should be YA paranormal, which would be a better audience for the POV and storyline. Because despite some tepid Amazon reviews, this is an awesome storyline, great characters, well-executed timing, and world building of a secret subset of society that doesn't rely on any apocolyptic shift in the current world, but layers right into the shadows of real-time America.

Obviously, I can't say enough good things about this book. Grab a copy on AMAZON and decide for yourself.

Posted by Katie O'Sullivan at 7:55 AM