Monday Book Review: Out of Bounds, by Jillian Quinn 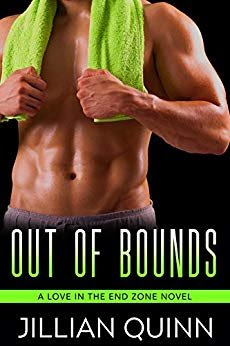 Out of Bounds, Love in the End Zone, Book 1, by Jillian Quinn
Published August 2017 by Penn Publishing

A misunderstanding cost them everything. Now, they have a second chance...

Sebastian Prince has it all—money, looks, women, and The Heisman. But he can’t get the one thing he wants. Two years ago, Bash lost the only girl who ever made him feel something. And he wants her back.

Tori Reynolds hates football. She hates Bash even more. After a not-so-chance encounter at a game, Bash has another shot with the girl who got away. While Bash might be a different person than before, Tori is hesitant to let him back into her life. But Bash has never turned down a challenge. This time, he’s not just looking to score.

Are you ready to meet Bash? One click to discover why readers are calling Out of Bounds their favorite second chance football romance.

This is the first book I've read from this well established, international best-selling New Adult author, and highlights both the best and worst parts of this genre. The story is told he said/she said in first person POVs, with an awful lot of thought repetition from chapter to chapter, almost as if the story first appeared in serial form and needed to remind readers of the salient points each time the POV was onstage.

The sex scenes sizzle off the page, with the confident alpha male acting well beyond a college senior... But the self absorbed and somewhat whine-prone heroine kept rubbing me the wrong way. I understand that the author was trying to show her as "strong" but strong shouldn't always have to equate with prickly or bitchy.  To the point where she makes it hard to understand why the hero puts up with her shit or why he's been pursuing her for so long.

The backstory was thin at best, and if you are going to actually go there and have your main character be diagnosed as bipolar, you need to do more with it than use it for an excuse to miss two months of school. Bipolar is manageable with medication, but it's a constant, and also should mean the girl is more aware about drinking, partying, her mood swings, etc. I was not only disappointed by the one and done reference, but also by the casual portrayal of a serious medical condition.

The secondary characters were stereotypes instead of fully fleshed out, including the best friend and the main antagonist, the bitchy rich cheerleader who wants the hero for herself. But with NA this isn't unusual and works fine if done well. Or if you get so invested in the main characters that the rest are just background anyway. Which I didn't.

But the sex scenes are pretty hot.

I'd be willing to try another book from this author, because I do understand that the bipolar thing might have been the main reason I disliked this story and these characters. If you want to check it out for yourself, grab a copy on AMAZON