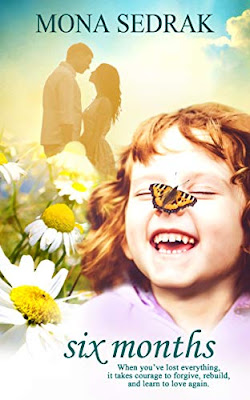 
For twenty years, Mikala Jacobson had it all: loyal friends, a precious little girl, and a man who adores her. Then double tragedy strikes and her perfect world shatters.

Good friends, Rena and Jake are instantly by her side, protecting her from her husband David's sordid secret life and his final drunken confession.

With their help, Mikala finds strength to rebuild and redefine her life. As her spirit and heart heal, she not only finds closure, but the beauty of a new love built upon an old friendship.

The dramatic tale of loss, sorrow, and redemption tells a powerful story of second chances, mostly through the eyes of a mother who's spirit and soul have been broken by the ultimate loss - the death of her daughter and the subsequent suicide of the guilt-ridden husband who'd been driving the car. A bleak premise for sure, but also raw and real and heartbreaking in its lyrical telling.

The first chapter of this story weaves disjointedly back and forth, from a remembered good day to the frozen bleak cemetery to the fateful day of the car crash that took a child's life and shattered her mother. Not an easy breezy start to any story. Take it slow, and don't let it stop you. Seriously. This is the author's debut at fiction, and while the first pages are not smooth the story will slowly suck you in until you're turning pages in spite of yourself.

As the main character begins to slowly heal, so does the prose, becoming more orderly in its storytelling, trying to make sense of the tragedy instead of throwing it scattershot at the reader. And as the main character, Mikala, puts her heart back together and lets her friends back into her life, the words on the page become lyrical and flowing. By the end you won't want to put it down, eagerly wanting the happy ending that Mikala so desperately deserves.

This is not a romance novel, per se. Told in various voices and points of view, this is a story of loss and love and second chances for all the characters involved, in the most basic senses of the words. This is also not a fast read, or a pick-it-up-when-you -have-a-second kind of book. Grab a cup of tea, a box of tissues, and curl up on the couch for a good cry. I think fans of Jodi Picoult and Nicholas Sparks will enjoy this story, and this new voice in fiction. I look forward to the next book, which I hope has a smoother first chapter but just as much emotion packed in its pages.