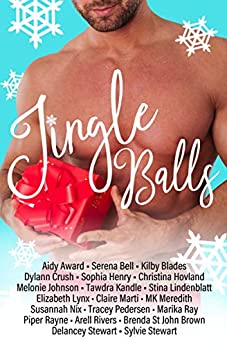 Jingle those balls for a great cause and get a head start on the holiday spirit with this spicy collection of romantic comedy stories. Twenty of today’s most entertaining rom-com authors have teamed up to go #Nuts4Books to benefit the Testicular Cancer Awareness Foundation.

Curve Ball by Aidy Award
I Told You So by Serena Bell
Sleigh My Name by Kilby Blades
A Blue Balled Holiday by Dylann Crush
Jingle Ball Bender by Sophia Henry
Ball Sacked by Christina Hovland
Coldcocked by Saint Nick by Melonie Johnson
Under the Mistletoe by Tawdra Kandle
Decidedly for Christmas by Stina Lindenblatt
Licking His Candy Cane by Elizabeth Lynx
Wrapped Up With You by Claire Marti
One Jingle or Two by MK Meredith
Rockin’ Around the Jingle Balls Ball by Susannah Nix
Lick My Snowballs by Tracey Pedersen
Deck the Halls With Balls by Marika Ray
Not So Silent Night by Piper Rayne
Out of the Eggnog by Arell Rivers
Mistletoe Hearts by Brenda St. John Brown
Scoring a Holiday Match by Delancey Stewart
Nuts About You by Sylvie Stewart

Irreverent, Outrageous, Over-the-top Fun – all for a Good Cause

Jingle Balls is an anthology of Christmas stories with a common theme and for a common cause: raising money for the Testicular Cancer Awareness Foundation. The theme the stories share is that there is a holiday fancy-dress ball that’s a fundraiser for testicular cancer – the Jingle Balls Ball. Except, it’s not just one party in one place that each author’s characters are attending. These parties are all over the U.S. and all have their authors little twist to them, running the gamut from a black tie fundraiser at a country club to a male auction at a swingers club, and everything in between. The titles of the stories are a suggestive hoot – Licking his Candy Cane? Jingle Ball Bender? Ball Sacked? Clever and funny and oh-so-hot, like much of the writing.

I read them all – some a bit longer, some a little too short leaving you wanting more. Most of the authors involved characters from a series in progress, giving you back story or secondary characters from another story getting the spotlight. Going into this, I only recognized two of the author names, but now I’ve added several more to my list that I need to check out.

My favorite story is from Claire Marti, the reason I bought the anthology in the first place. I love the Southern California settings of her Pacific Vista Ranch series and heard she was giving one of her minor characters a shot at love – I needed to read it!

Rafe and Phoebe are coworkers at the same financial firm, both Harvard-educated and at the top of their game. Each thinks they’ll be the one to take over the firm when the CEO retires. And they hate each other. Phoebe was a year behind Rafe at school, and worshipped the playboy from afar but he never noticed the mousy student she was. When she started at the same firm, Rafe thought she was one of the stuck up East Coast girls who wouldn’t give him the time of day outside the bedroom. When they are both sent to represent the company and woo new clients at the annual Jingle Ball fundraiser, they agree to work together for one night. Over wine, misconceptions each held are torn down and sparks fly as things between them heat. I’m hoping the author turns this into a longer novel because as satisfying as the happy-for-now ending was, I would love to read more of Rafe and Phoebe’s story!

Great stories, lots of laughs, not for the easily offended, as there are a lot of f-bombs and there’s an awful lot of sex in closets and other public spaces! But it’s all for a great cause and all in good holiday fun!

Grab your copy on AMAZON today!

Posted by Katie O'Sullivan at 7:25 AM