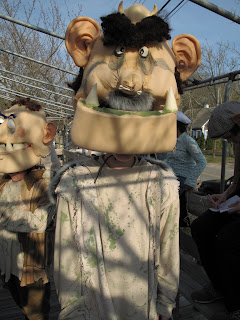 Cape Cod Weather Today: Perfect. This is what April is supposed to be like. Bright, clear, blue skies, 52 degrees going up into the mid 60s. Saturday we were fogged in and in the damp 50s all day while Boston had its 90s heatwave, and yesterday we had a muggy 80 degrees, but on the beach was lovely with the cool breeze coming in off the water. Today is perfect and I'm going to walk the dogs at low tide, but with a quick blog post first....

THE BFG has completed its run on Cape Cod. Nineteen performances from April 9th through April 26th. And these kids were real troupers, in all the truest senses of the word.

There were falls and spills, there were sicknesses and throwing up back stage during shows. There was a torn Achilles and a broken eardrum leaking blood down the boy's neck. And yet the show always went on.

These aren't professionals, although most of them are already well-seasoned actors. Only my son and one other girl were first-timers. But they were all wonderful.

It's over now, as is spring break. So it's back to the regular routine, and school work, and writing. And thankfully the weather has finally turned for the better, so I'm off to walk the dogs before settling down to rewrite those critical first chapters of my YA/MG/fantasy whatever it turns out to be. Right before vacation week, I got the email back from the agent I was holding my breath for, who said it all sounds cool and creative, but she didn't connect with the characters in those critical first pages as much as she would have hoped. She didn't ask for revisions or offer a resubmit, but the advice was good enough. I still have work to do.

Because if the kids can go onstage with twisted ankles and broken eardrums, I can bloody well sit down and rewrite my mermaids until I get it right.
Posted by Katie O'Sullivan at 9:06 AM