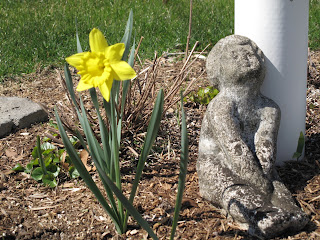 Cape Cod Weather Today: Sunny, bright blue skies and 50 degrees. The weathermen have been claiming chance of thunderstorm every night this week, but not tonight for some reason. Perfect weather for yard work: mowing the lawn, taking the leaf barrels to the dump, recycling, and cleaning out the garage in general....

There. The weather report includes all my plans for the day. Except writing. Hmmm...

I wrote yesterday morning, when I should have been doing these chores. Except I woke up with the urge to write. A good thing if you're an author. I'm working on making the first ten pages of my MG/YA as compelling as possible. Fleshing out the characters so they jump off the page and you care when the young prince is slaughtered on page two. I mean, you just met him, why should you care? I'm trying to add that element, because apparently I didn't quite get it the first time. Or the second time. I think the story line - the plot and subplots - are all polished. It's the emotional tug that needs to be worked on.

Why care about these characters? Why read past page 10?

When you have an author you're already familiar with, I guess it isn't as important. For example, I just read one of the Eve Dallas stories by J.D.Robb. It was my first, but not the first in the series. When I picked it up, I was unfamiliar with the characters, the time frame, the setting in general... but I trusted the author so I stuck with the story. She is a known quantity, so I went with it for longer than I might have otherwise, until she sucked me in. It took a while, because I'll admit to being annoyed by all the assumptions made about the reader's foreknowledge. But, on the other hand, I've also read a few of the Stephanie Plum books by Janet Evanovich. They annoy me the other way, by explaining more than I want them to, since I've already read prior books about this character. It's like the Magic Treehouse books my kids read in second grade. Each book explains the whole premise in chapter one, so you can read them in any order. And yet, it's annoying to have to read the premise all over again when you already know it. My daughter refuses to read any more of them for that reason.

But a new author has a fresh slate to write on, and her readers have no prior knowledge for good or bad. You have just the first few pages to make a reader care enough to keep going, to want to know what happens to your characters. For the reader to put herself in the story, and be invested in the outcome.

This is what I'm just coming to grips with. I'm so close to my characters that I understand their motivation without having to read them, and I know what they look like in my head without having to describe every detail. But you don't. So I need to convey this knowledge in a way that intrigues you without boring you to tears. Or boring you at all. Are you bored yet?

SO ... I'm off to do the yard work, while these ideas percolate inside my brain. Maybe I'll be inspired and stop mowing halfway through the yard, or leave the full barrels of leaves and sticks in the back of the truck while I run inside to write down an idea before it evaporates.

If you drive by my house and see only half the yard finished, you'll know I was inspired today by something other than the tractor! Besides, it has headlights. I can always finish later ;-)
Posted by Katie O'Sullivan at 8:37 AM

Email ThisBlogThis!Share to TwitterShare to FacebookShare to Pinterest
Labels: adjectives, characters, writing, YA