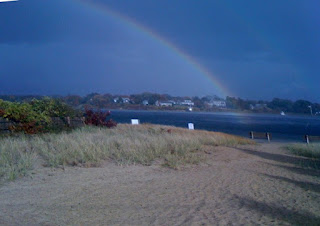 Cape Cod Weather Today: Still raining. Not like yesterday, but still. Supposed to clear up soon - hopefully soon enough that the Sox get to play the season home opener. But need to decide whether I want to take my Brownie Troop out in the sure-to-be-mud for their field trip to help Americorp (our Earth day project. Why isn't Mother Earth cooperating?)

I actually got to attend opening day one year, back when I was working in advertising and our agency had the Sam Adams beer account. I don't remember who they played, and I don't even remember who won the game (and not because I was drinking, although there was some of that too...)

What I do remember is the energy. The buzz. The feel of being at Fenway for the very first game of the season. Even though it's April and the weather never cooperates all the way (like yesterday) But EVERYONE is Still so excited to be there, even the security guys and the people selling hot dogs in the stands are smiling constantly. They're all so jazzed - - not like when you go to a game in August and half the fans are on their cell phones the whole time, or the screaming babies grab your attention more than the announcers or the players.

There is no place in the world like Fenway Park on Opening Day.

My friend Charlie Hamilton took a year out of his life to travel to all the major league ballparks in the United States (and up to Canada, too.) A die-hard Boston Red Sox fan, he'd been to enough games at Fenway and watched enough games on television to want to make the ultimate comparison, and find the best ballpark hotdogs out there. Or something like that. (maybe it was just a midlife crisis...)

I've heard of other people who've done this, but he did it all in one season. And traveled most of the route by bicycle. My kids did the illustrations that he used on his website, and while he biked he raised money for the Dana Farber Institute, the official charity of the Boston Red Sox. He carried an ultra-light laptop and blogged about his journey from the road. The kids and I followed his journey, putting pins in a map and looking at the pictures from the various places he'd been. When he got back to Boston in September, he saw his last game of the journey at Fenway Park. It was a long, amazing journey that took him through the heart of the United States and surprised him out of his cynical mindset time and time again. He's still trying to finish the book he started, chronicling the physical and mental journeys. All inspired by his love of baseball.