Welcome to the first day of Blogger Book Fair, an online event involving hundreds of authors from around the world! The idea is to highlight new and up-and-coming authors.

My guest today is Marshall Best, whom I just "met" earlier this month through this event. He writes sweeping epic tales that sound simply incredible! Meanwhile, I'm over at his place chatting about my latest book, Son of a Mermaid, and hundreds of other authors are out and about chatting about their books... explore the book fair and have fun meeting some interesting new authors this week! 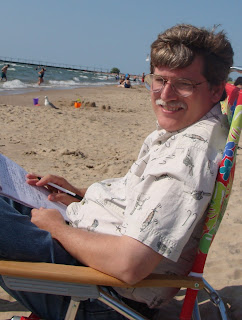 Welcome, Marshall! Give a brief bio and tell us what kind of books you like to read and write.

My wife, Tracey, and I have six great children ages 5-17.  I live in Fishers, IN.  I have learned to play piano, marimba and bagpipes, love airplanes, target shooting, fishing and writing.  Mostly writing.

I am the grandson of the founder of Best Lock Corporation and served there as VP of Manufacturing. The Best family is no longer involved and I now own my own business, Marshall Best Security Corporation, which competes against the old company. I have a great Best Lock memorabilia collection and occasionally speak at lock collectors meetings. It is a great heritage. If you cut me, I bleed locks.

I love history. My usual fare is autobiographies of WW I and WW II pilots, snipers, tankers. I also like all the Tom Clancy type novels.

I've read a boatload of ancient writers such as Diodorus Siculus, Pliny the Younger, and the Geography of Strabo from the Loeb Classical Library. As I read those, I made a note whenever something interesting was brought up, and I’ve made great use of these notes in writing this series.

I love the peaceful, totally focused writing time. Writing is like putting together a giant mental jigsaw puzzle. When I’m writing, I like to write for an extended time so the thought flow is continuous and connected. The words just seem to flow from my pen.

When I come to a point that needs further research, I draw an underline in my text and go on, keeping the momentum up on the rest of the text. To avoid writer’s block, I’ll jump ahead from one section of the book and write another. When I have several of these fleshed out, I’ll come back, place them in the appropriate section of text and then write the transition.

I really enjoy writing about the ancient gods, particularly from Rome and Greece, telling their stories more in line with how the ancients believed than with such distortion that is shown in popular movies today.

I also like the wisdom and philosophy parts where I can “wax eloquent.”

Guiamo began as “go with the flow,” but as the books developed, it has become more structured, though not to the point of formal outlines.  I do know there will be nine books.

I’m now in Book 5 and I have pages and pages of notes of points to cover, genealogies, calendars to lay out key events and the like.  What drives me nuts is that I can’t keep everything in my head, but what author can?  When I write something that reflects on previous text, I have to go back and research the details.  Oh bother.  However, I know where I need to go in the plots of the remaining books.

I’d be Tax-Immunity Man!  Soaring through the stratosphere spreading prosperity across America!

I released the first four books simultaneously. Following Guiamo is Cúmóro, and the third book is Mórlános. Book four is entitled Inis Emain Ablach. The beginning is set in 50 B.C. Ireland. Here Guiamo really gets involved in the secrets of the gods. Let’s just say the gods are not too happy with Guiamo.

In 60 B.C., ten-year-old Guiamo Durmius Stolo, an exceptionally gifted Roman orphan, is abandoned in Gaul. Left to fend for himself, Guiamo is set onto a path of legend. Recognized by the gods as having world-changing talents, he is given a weapon that changes his destiny and the world's forever.

Combining legitimate legends with actual historical events, Marshall Best weaves an epic story that portrays the ancient world as it might have been, a world which the ancient historians recorded as fact; a time when gods ruled the earth and strange creatures dominated the land. It is the era of civilized conquerors exploring distant and primitive new lands. Scant recordings left to us today by ancient writers only touch on the fringe of the fantastic and brutal reality that existed in those distant lands of the west. Into this age, young Guiamo enters the world stage as the great game-changer, and by his hand the gods and beasts become destined to disappear into myth and legend.

Okay, you’re casting the movie version of your novel – who would you choose for the main characters? We’re talking dream cast.

I don’t claim to have any great knowledge of acting skills and don’t follow most actors, but here goes...

Guiamo would be played by a child actor, of course, in the beginning of the story and he goes from being 10 to about 15 by the end of book one.  I don’t have a child actor in mind for this key role. The fisherman Gabinius would be John Hurt, aged, weathered, experienced and full of simple, but profound wisdom. Now, Guiamo’s best friend, Ursius, isn’t much older than he is, but I’d love to see him played by Channing Tatum in the later books in this series. He’s a man’s man and comes across as a natural leader of men.

My choice for the arms merchant Gabinius would be Liam Neeson.  He could play this role well as the war-wise veteran who has many things to teach Guiamo in a no-nonsense way.  The bandit leader Actus would be Tommy Flanagan, rough, road weary and burdened, but strong.  The lame-legged counselor Suadusegus could be played by Derek Jacobi, though he’d be better as the Druid Abartach in later books.  Susama, the Druid wife of Suadusegus might well be played by Helen Mirren.  And of course, a cameo appearance by yours truly and my son, William.

Very cool cast (and I love Channing Tatum!) So, Where can readers find your book and where can they find you online?

You can find Marshall online at