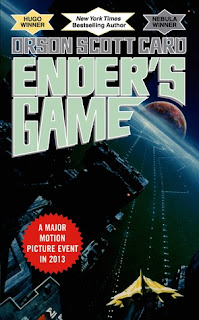 With the movie coming out soon (and the LGBT controversy swirling around it, keeping it in the news), I decided to read ENDER'S GAME, a book my oldest son has been trying to get me to read for years. It's one of his all-time favorites. But I resisted when he mentioned "video gaming" several times in his descriptions. Not my cup of tea.

(And about the controversy due to the author's hard-line anti-gay marriage stance? He's wrong. Marrying the person you love should be everyone's right. Everyone. Time will prove just how wrong as gay and lesbian marriages become more accepted throughout society.)


In order to develop a secure defense against a hostile alien race's next attack, government agencies breed child geniuses and train them as soldiers. A brilliant young boy, Andrew "Ender" Wiggin lives with his kind but distant parents, his sadistic brother Peter, and the person he loves more than anyone else, his sister Valentine. Peter and Valentine were candidates for the soldier-training program but didn't make the cut—young Ender is the Wiggin drafted to the orbiting Battle School for rigorous military training.

Ender's skills make him a leader in school and respected in the Battle Room, where children play at mock battles in zero gravity. Yet growing up in an artificial community of young soldiers Ender suffers greatly from isolation, rivalry from his peers, pressure from the adult teachers, and an unsettling fear of the alien invaders. His psychological battles include loneliness, fear that he is becoming like the cruel brother he remembers, and fanning the flames of devotion to his beloved sister.

Is Ender the general Earth needs? But Ender is not the only result of the genetic experiments. The war with the Buggers has been raging for a hundred years, and the quest for the perfect general has been underway for almost as long. Ender's two older siblings are every bit as unusual as he is, but in very different ways. Between the three of them lie the abilities to remake a world. If, that is, the world survives.
Ender's Game is the winner of the 1985 Nebula Award for Best Novel and the 1986 Hugo Award for Best Novel.

My sons both insisted that I read this novel - my oldest boy read it "at least 5 times," he says. As we're looking forward to the upcoming movie, I read the book. And enjoyed the book. Not enough to read it again (or 5 times) but enough to totally recommend it.

We meet Ender Wiggin when he is 6 years old, right before "They" come to take him away to Battle School. The book is set in an undetermined time in the future, after there has already been interstellar battles with bug-like alien creatures (I pictured it kind of like Starship Troopers, but at least those kids were high school graduates. Ender and his cohorts were all pre-pubescent.)

The Earth is under attack, and the military is seeking leaders who can defeat the alien forces. Genius-level children are recruited to train in battle tactics and learn to be commanders, and training occurs mainly through the use of simulators - video games.

My sons are gamers; I am not. The "games" play a vital and central role in the storyline. This is also a boy-centric book, with few female characters. I hate to say something as simple as "it's a boy book," but I think in general young male readers will get more enjoyment from this story than young female readers.

Despite the high levels of violence throughout, there is also a huge emphasis on morality and the conflict of conscience created by war, battle, and self-defense. The author does an exquisite job of walking a razor-fine line through this minefield, leaving the reader to ponder his meanings and wonder if war is ever the answer.
Posted by Katie O'Sullivan at 11:37 AM