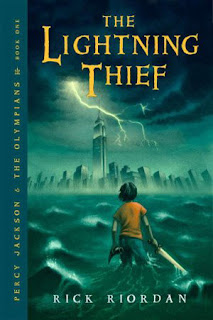 About the Book:
Percy Jackson is about to be kicked out of boarding school... again. And that's the least of his troubles. Lately, mythological monsters and the gods of Mount Olympus seem to be walking straight out of the pages of Percy's Greek mythology textbook and into his life. And worse, he's angered a few of them. Zeus' master lightning bolt has been stolen, and Percy is the prime suspect.

Now Percy and his friends have just ten days to find and return Zeus' stolen property and bring peace to a warring Mount Olympus. But to succeed on his quest, Percy will have to do more than catch the true thief: he must come to terms with the father who abandoned him; solve the riddle of the Oracle, which warns him of betrayal by a friend; and unravel a treachery more powerful than the gods themselves.


My Take:
I can't believe it's taken me this long to read this book, but where I was developing my own underwater mythology, I didn't want to be swayed by Rick Riordan's best seller. So I waited. I'm glad I finally gave in and read it, as I thoroughly enjoyed the ride.

The Lightning Thief is a fun and exciting read, barreling along at break-neck speed with cliff-hanging chapters that keep you reading as fast as humanly possible.

I can totally see why this series is so popular with middle schoolers, as well as with their teachers.

The writing is a crisp and easy to read first person adventure. The story itself is laden with true-to-history mythological references, albeit transferred into the modern world. No offense to Edith Hamilton, but this book would seem much more fun for a middle schooler than her more straight-laced classic. And I can totally see why there's currently a resurgence in myth-based YA fiction in the wake of Riordan's huge success.

I did read some criticism of the book's similarities to the Harry Potter series; a half-blood boy who splits his time between the mortal and magical realms, a misfit hero with two best friends - a boy with heart and a girl with brains - to help him on his quest to save the world... yes, there are similarities. But I don't think the author was imitating a formula, as the critics seem to imply, and I don't think the series would have been so popular if it were merely a knockoff.

I do, however, think the story and the voice appeal much more strongly to younger readers and have less cross-over appeal than some other YA series. I know plenty of fifth graders who swear by these books, but not as many eighth graders, and certainly not high schoolers. I'll be sure to recommend this book and this series, but am not sure I'm tempted to read the rest of the series for myself.

Bottom line? If you have an 8-12 year old who needs a great summer series (or school year reading, for that matter) start them on this series (that is, if you can find a child who hasn't read them already.) You'll both be happy that you did.
Posted by Katie O'Sullivan at 5:00 AM