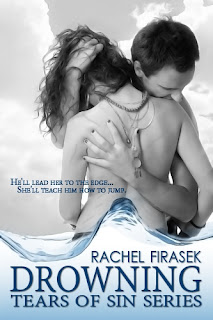 *Drowning is a New Adult Contemporary Romance suited for 18+ due to some violence, language, and sexual content*

Those words would change adrenaline junkie, Alice Harrison's life forever. She's a party girl that doesn't believe in love until she meets a man that only writes about it.

Seth James escaped his overbearing father and moved into one of the James family's vacant condos, hoping to create the music he loves in peace. But the fragile calm he's envisioned shatters when a tiny woman with a world full of energy bounces out of the elevator and nearly takes him out.

With the patience of a saint, Seth seeks the dark that keeps Alice from enjoying life. He challenges her to exorcise the demons in her past in order to discover the true meaning of love. But when the walls fall down, the hidden deceptions will bare the ugly truth about a woman drowning in sorrow and a man who may not know how to be her hero.

I feel lucky that the author provided me with an ARC for my honest review. I'm so glad I got to read it early - except that it kept me up and reading way, way too late into the night...

This book kept me up way too late into the night and early morning hours, unwilling to walk away from the sexual tension and roller coaster plot line. The well-written if mercurial characters kept me on my toes, as each new situation arose to challenge them. I would recommend this book to readers who enjoy dark contemporary romances.

Alice Harrison is a 19-year-old thrill-seeking life-of-the-party girl with a dark and secret past. She lives in a condo with her half-sister who is recovering from an accident that Alice blames herself for. When she literally runs into the landlord’s oldest son, she has no idea what to make of him, or her reaction to him.

Twenty two year old Seth James seems like a stereotypical rich boy with an absentee workaholic for a father and a past he’s rebelling against. He’s a musician who’s drawn to dark emotions in others which he uses in his music, but he doesn’t let himself get emotionally involved with anyone. He doesn’t want to be anyone’s hero. Until Alice. Even then, he fights against the honest emotions he feels, trying to keep his thoughts shallow and sex-driven until he is forced to face his emotional fears head on.

When the past Alice is running from rears its ugly head back into her present, both she and Seth have to decide whether to fight for what they’ve found in each other, and the truths they have revealed about themselves in the process.

The author tells the story with first person narration that alternates between the two main characters, with the chapters marked by narrator. It’s easy to tell who’s point of view the chapter is from even without the subtitles, as Seth refers often to his near constant state of arousal, which I found amusing at first, but felt like it was a hallmark of immature thinking that he should have grown out of it much sooner in the story arc.

Although the ages of the characters are firmly in the New Adult range, I’m not sure if I agree with this book being in this category. This is a dark and violent book, even though much of the violence is emotional. The physical violence is alluded to almost from the beginning, although there are very few actual scenes of physical torture (no rape.) Parts of the story reminded me strongly of The Girl With the Dragon Tattoo, minus the confusing Swedish names and places. Having read that series of books and a few others that included victims of childhood abuse, I wasn’t bothered by Alice’s wild mood shifts or some of her inconsistencies as they seemed in character for what she had been through in her life.

All in all, a dark and completely absorbing story. And I feel compelled to seek out more books by this author really soon. Kudos to Ms. Firasek – you’ve just earned another fan.

Rachel Firasek spends her days daydreaming of stories and her nights putting the ideas to ink. She has spent a dull life following the rules, meeting deadlines, and toeing the line, but in her made up worlds, she can let the wild side loose. Her wonderful husband and three children support her love of the written word and only ask for the occasional American Idol or Swamp People quality hour.

She has a philosophy about love. It must devastate or it isn’t truly worth loving. She hopes that you all find your devastating love and cling to it with all your heart!