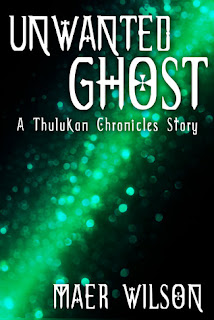 Thulu & La Fi have inherited an old, furnished Victorian. What they weren’t expecting was that the furnishings included a ghost.

Usually the Thulukans are happy to take on supernatural clients for their detective agency. But there’s something about Darla Redding that bothers La Fi - and with good reason. They discover that Darla has a much darker past than hinted at by her “normal” life. She’s definitely not a ghost they want haunting them. So, if they want to be rid of their unwelcome house ghost, Thulu and La Fi need to solve her murder.

“Unwanted Ghost” is the second prequel novelette to Relics in “The Thulukans Chronicles.”

It seems to be a trend recently for authors to put out novelettes or short stories about their characters in between novel releases. I recently reviewed COUNCIL COURTSHIP by Constance Phillips, which was a novelette follow-up to FAIRYPROOF, to keep the readers wanting more until the sequel is released.

This past spring I reviewed Maer Wilson’s debut novel, RELICS, about a supernatural detective agency, which I thoroughly enjoyed. While working on her second novel, Ms. Wilson has penned two short stories set in this same world. UNWANTED GHOST is the second of the novelettes, a prequel of sorts to the main story in RELICS. It’s not really a “prequel” because RELICS starts at the beginning, with La Fi as a small child, before she moves to California and meets her future husband. But this story fills in some of the gaps.

In UNWANTED GHOST, the main characters Thulu and La Fi have just recently graduated from college and set up their new business – a detective agency that specializes in solving problems for the already deceased. One of their clients has left them an old Victorian house in payment, but when the couple go to inspect their new property, they discover a ghost who refuses to leave.

La Fi decides the only way to be rid of the ghost is to help her figure out who killed her, but it’s hard to work a case when your client isn’t telling you the truth.

I enjoyed reading another story set in this world, although I didn’t feel like it furthered my understanding of the Thulukan’s world too much. The main characters acting much the same as they were in RELICS, although since the remodeling of the Victorian is discussed quite a bit in RELICS, it was interesting to get a little of the pre-remodeling history of the home.

I enjoyed this very short story, and look forward to reading Ms. Wilson’s next full-length novel, which I think is supposed to be coming out before the end of the year. Hoping for more information later this week! Stay tuned if you're a fan of the Thulukans!

After a successful career being other people, and later teaching others the many tricks of that trade, Maer Wilson has decided to be herself for a while. Turns out she's a writer. She's always loved stories, especially fantasy, mystery and sci fi. Maer was born in the Year of the Dragon and has a dragon-themed room in her home, but sadly no dragons in the back yard. When she's not writing, Maer plays online video games, teaches college and reads. She also co-hosts the literary podcast, “MythBehaving” and writes for two gaming fansites. She lives in the high desert of Southern Nevada with her two dogs, a chihuahua and a poodle. Relics is her first novel and released on May 1, 2013. She released a prequel novelette, "Ghost Memory", in The Thulukan Chronicles. You can visit her website at http://maerwilson.com/
Posted by Katie O'Sullivan at 10:35 PM