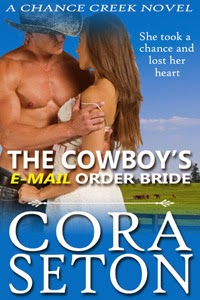 The Cowboy's E-Mail Order Bride, by Cora Seton
Published 2013 by One Acre Publishing

Ethan Cruz should be mending fences on his Montana ranch, but instead he’s driving to the Chance Creek, Montana, airport – to pick up the bride he didn’t know he had. This latest salvo in his ongoing practical joke battle with his best friend, Rob Matheson, has gone too far, and Ethan plans to send his “bride” right back home, then get busy plotting his revenge. One look at Autumn Leeds changes his mind, however. Perhaps he needs a bride, after all. A breathtakingly beautiful city bride.

Autumn Leeds needs a story – fast – or she’s going to lose her lucrative contract with CityPretty Magazine, so when she sees the crazy video plea for a modern mail-order bride for a cowboy, it sounds like the story of the century. Making a video of her own, she casts herself as the perfect mail-order bride for a rancher, but when she finally reaches Montana, she’s surprised to find Ethan’s the perfect cowboy husband-to-be. Against her better judgment, her plan to keep her handsome groom at arm’s length disintegrates into a night of passion spent in his arms.

Ethan knows he can’t keep playing this game – he has to come clean with Autumn and tell her the truth; about the practical joke and about the state of his ranch. He’s about to lose it all because of the debts his mother racked up before his parents’ deaths. Now his sister, Claire, wants to sell the ranch and collect what little money they can. He’ll be out of a home and a job, and in no shape to support the bride he desperately wants to marry, after all.

Autumn’s in bigger trouble than ever. Not only has she fallen in love with the subject of her expose – she might be carrying his child. If she doesn’t write this article and secure her contract for another year, she’ll lose everything – her career, her apartment, and more importantly, her family’s approval. The only alternative is to stay and marry Ethan. But how can she trust a man she’s just met when she knows too well that men always let you down?

Can a love based on lies last?

I have to admit I picked up this book because the title made me laugh. Well, and cringe a little as I hate when the word "email" is hyphenated. I'd never read a cowboy romance before this summer, but Devon McKay's Cowboy on the Run hooked me on the cowboy hero idea. bHowever, just like every vampire isn't as sexy as Eric Northman, not every cowboy romance has a swoon worthy hero. Luckily, Cora Seton delivers.

This is the first book in Seton's Cowboys of Chance Creek series. Her cowboys live on ranches in rural Montana, herding cattle, raising horses, drinking beer, and playing jokes on each other like friends who've known each other forever often do.  We meet this particular group of guys while they are waiting at the airport for the latest practical joke to play out.

One of Ethan Cruz's buddies posted a video on You Tube looking for a bride for Ethan. They filmed Ethan's drunken rant one night, edited and posted, then sorted through the applicants, all without telling Ethan. He's understandably pissed, and not sure what he's going to say when the unsuspecting woman gets off the plane.

Autumn Leeds has secrets of her own. A writer for a snarky NYC women's magazine, she answered the ad in order to write a sardonic article and secure her job at the magazine. She doesn't expect to actually fall in love with a cowboy, of all people, and barely expects to last the trial month she agreed to. And yet...

Sparks fly between them when Ethan and Autumn first meet. Watching them try to keep their secrets and try not to fall for each other is both hilarious and heartbreaking and makes for a fast, fun read.