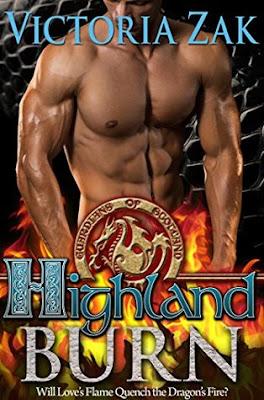 The past never stays in the past, it rears its ugly head eventually. James the Black Douglas knows this all too well. With a past that has left him vengeful and his dragon blood thirsty, his reputation as a ruthless warrior haunts his enemies in their sleep. As his allegiance stands with Robert Bruce, the King of Scotland, he must now repay a debt to the king and agrees to marry his daughter, Abigale Bruce. The problem is he doesn’t want a wife. When flames start to burn out of control between him and the auburn-haired lass, he must decide to either kindle the flames of passion or shelter her from the truth and set her free.

Determined to keep his daughter safe and out of the hands of the English, Robert hides Abigale behind the safe walls of a nunnery. After eight long years of living her life in seclusion, Abigale is finally set free. But her new found freedom comes to an abrupt halt when she learns of her betrothal to the infamous Bogeyman – James the Black Douglas. She soon finds herself falling in love with the uncontainable and haunted man. Is her love enough to soften his hardened heart?

A sizzling paranormal tale set in 1314 Scotland, the author begins the book with a prologue to explain the premise and mythology her series is based upon. She's come up with a unique take on why the Highlander clans were such fierce and bloody warriors: they're actually not human, but a different race entirely. A race of dragon shifters. Which would explain their legendary fierce fighting abilities, quick tempers, and the "otherness" generally associated with Highlanders.

I mean, it makes a kind of sense.

There was a lot I enjoyed about this book - obviously, the premise being the main thing- but in terms of the execution, I wish the author had painted the characters with more consistent brush strokes. I wanted to like both the hero and the heroine, but at times struggled with stupid things each of them did, or ways they contradicted themselves. I felt a stronger hand in editing might have helped smooth the character growth curves to something easier for the reader to follow and fall in love with.

That said, this was a fast-paced, enjoyable read if you don't get too hung up on every detail. And especially if you like historical fiction with a paranormal bent,  you should give this series a try. Dragon shifters are hot. (Yes, pun intended.)

Find your copy on AMAZON. When I posted this, the Kindle version was free - so why not give it a try?