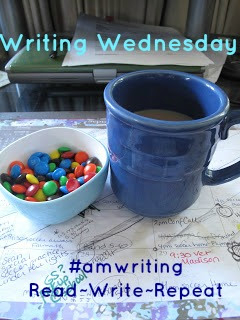 “Parting is such sweet sorrow…”
~ Juliet to Romeo (William Shakespeare)

When readers and writers discover the final book of my series is being released, I usually get asked one of two questions (and sometimes both):

Well, I’m going to attempt to address both those questions today in my guest blog post.
Juliet said it best to her tragic love interest in Shakespeare’s famous play. Her words resonate with how I feel regarding the release of BEAST OF ALL. This is the 5th and final book in the award-winning, Amazon best-selling Carus series which launched my publishing career almost three years ago. To say the ending of a series is bittersweet is putting it mildly.

It’s hard to say goodbye to the characters who’ve been yacking in my head for over 5 years, who’ve taught me all good laid plans and plots are nothing when confronted with a strong-willed heroine who has a mind of her own and a secret agenda.

But saying farewell is also liberating. The conclusion of a series releases me of the (mostly) self-imposed pressure to write the next installment, then the next, then the next. The ending is a sigh of relief—the writing itch I’ve been scratching for so long has finally been relieved like I’ve been doused with barrels of calamine lotion.

Bittersweet and liberating aren’t the only emotions swirling around, though. With the release of BEAST OF ALL, my nerves have been a jumbled, tangled mess of misfiring signals. Those who know me well, know I’m a total A-type, OCD, stress-head, who may or may not struggle with anxiety from time to time… I worry. A lot.

I worry readers won’t find the ending satisfying. I worry the lovers of one of the characters will hate me forever and spurn any future works of mine because I killed their favourite. I worry that without the self-imposed pressure to pump out the next installment of a series, my drive and motivation to write will wither away…dissipate into the ether of the writing world, along with any popularity my books currently hold.

So how do I feel to “finally” be done a series? Sad, satisfied, nervous…

I’m truly proud of myself for committing to this journey—the steep learning curve of the unknown-to-me publishing world with all its quirks, foibles, and secrets. I’m proud I stuck with it, and no matter what happens with the reception of BEAST OF ALL, with the series as a whole, with my future writing career, I can look at the accomplishments I’ve made along the way and feel that fuzzy warmth bloom in my chest.

To all those writers struggling with self-doubt, or faced with the debilitated prospect of rejection—stick with it! Even if it only ends up being for yourself, finishing a sentence, a chapter, a book, a series…it all adds up to build confidence and craft.

Tips to writing a series:

Now for the second question… How did I do it? I’m not going to lie, I stumbled, a lot, but through the process I discovered a few things that helped make things easier.


1.    Write plot summaries for each book (preferably in advance). This doesn’t need to be detailed scene-by-scene, but major events that need to take place in each book should be noted. I won’t post an example here because it would include serious spoilers for the series. I always knew where my characters would eventually end up and the major events that had to occur to get them there. Now, some of my characters were crafty and wily and they ventured off-path more than a few times. And that’s okay.

2.    Keep a timeline for your main character’s backstory. For example, you don’t want to say they found out about their abilities 14 years ago in one book, and then say 20 years in the next (when 6 years haven’t gone by).

3.    Keep a timeline for your books. For example, if book 1 starts in spring (i.e. May) and follows the characters for a few weeks (3 weeks), then the story ends in June. Book 2, if it starts a month after the end of book 1, it’s now July and summer time. These are important details to know, especially for scene-setting.

4.    Keep a spreadsheet for your characters. I use excel, because I like its sorting features. I put in every single character mentioned. And I included as much detail as I had for them. Obviously I had more detail for some characters compared to others, but that’s okay. This spreadsheet ensured I didn’t use duplicate names, mess up physical descriptions, or use incorrect scent signatures. And the added bonus? I didn’t have to reread my books to find the information. 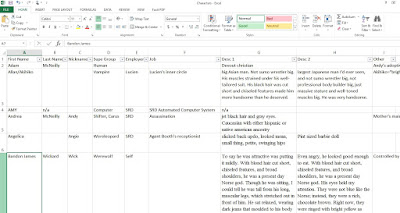 5.    Keep notes of important features/facts. For example, my characters have supernatural abilities. I recorded the wording used for demon summoning and facts about the animals some characters shifted into. Bears don’t roar. Mountain lions yowl. Shifters don’t retain any clothing when they shift.

6.    Other? Did I miss something? I’m sure I did. I have a document with words to search for and replace (or cut) during the editing process. I have a list of alternatives for very (very tired = exhausted). I use the “Emotion Thesaurus” by Ackerman and Puglisi to get ideas when stuck for a description. When I want to use a comparison (simile or metaphor), I think of the generic overused one and then twist it (the wheels spun in his head = the wheels in his head clanked around and fell off their axles). But all these little quirks are more to do with craft in general. Did I miss a great tip for writing series? Let me know!

I’d like to thank Katie for hosting me on her blog today. It’s always a pleasure to interact with other Wild Rose Press authors. I hope you enjoyed what I had to say and/or found something helpful in the post. To learn more about me, my books, or to get in touch, you can find me in the following places.