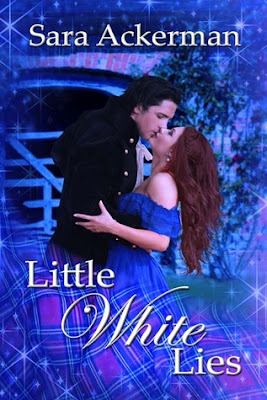 
After a lie triggers a series of terrible events, Amelia Westby is cursed and must tell the truth no matter how unpleasant that truth may be. For years, she has been shunned by society for her blunt honesty, and she despairs of ever finding someone who can accept her for who she is. A chance encounter with a mysterious stranger offers her an escape from her black and white existence of life amidst London's jaded ton, but when a secret threatens to destroy her happiness she must break her curse or lose the man she loves.

Upon learning of his brother's death, Tavis McGuire returns from the continent to inherit the Earldom of Stanton. Problems abound for the new earl after he inherits and soon he finds himself quickly embroiled in a dangerous game of espionage to clear his family name and to save his estate. But when he runs into a beautiful woman who could be the key to unmasking known traitors, Tavis must decide if he will choose to honor his duty to his country or to follow his heart.

Little White Lies gives the reader a little bit of fairy tale intrigue for a premise, mixed into a historical setting that uses the animosities  between England and France during the early 1800s as a backdrop for espionage and real life intrigue. Throw in a roguishly handsome Scottish lord, an elopement, a whole lot of sexual tension and a cast of characters who all seem to know more than they are telling... and you've got a debut novel that is an interesting read, despite its flaws.

Amelia Westby and her two sisters are cursed by a gypsy. Amelia can only tell the truth, her elder sister can only lie, and her younger sister can't speak to anyone outside of her own family. It seems an odd curse, and the circumstances are never fully explained. For all the flashbacks and backstory, that is the one scene I think would truly add depth and explanation since the curse is a major part of the story.

Travis McGuire, or Lord Stanton, also has a complicated but non-fairy tale backstory but his is more fully fleshed out. We understand his motivations, as well as his reluctance to let anyone get close. The best parts of the book are from his point of view, and watching him change and open himself to love.

While I enjoyed reading this story, the breakneck pace and liberal use of backstory to explain certain things made me wish the author had slowed it all down and taken the time to more fully explore some of the characters, motivations and situations, rather than giving thumbnail sketches.

Don't get me wrong, I enjoyed reading this story and would totally add Travis McGuire to my growing list of book boyfriends. And I look forward to reading more from this author as she flexes her writing muscles. 4 stars for an enjoyable debut novel.

Get your copy on AMAZON
Posted by Katie O'Sullivan at 9:00 AM