My latest romance is available for pre-sale right now with an anthology entitled HUNKS TO THE RESCUE. 15 authors and 15 hot alpha males jumping feet first into dangerous situations. The best part is that all the heroes are different, showing that alphas come in a delicious variety of flavors.

Which reminded me of this magazine column I wrote last March for CapeWomenOnline magazine for my "The Write Way" column. The magazine is currently undergoing transformation, and I'm not sure whether it'll be back up and running any time soon, but I had fun writing these tips and thought I'd share again. 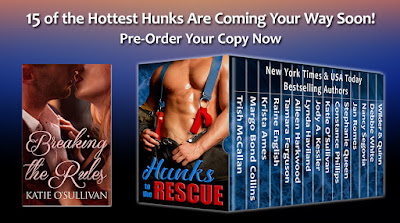 When you hear the term "alpha male" you think strong and in charge. Movie images of ripped Navy SEALs or muscle-bound Highlanders might flit through your mind. Or maybe you picture the powerful billionaire CEO, intense and driven with the "A" type personality.

Alpha males are a staple in literature as well as movies, and as a writer you should take time to master this stereotype (pun intended) no matter what genre you write. There's a big difference in creating a strong alpha male who might also have hidden vulnerabilities, as opposed to one who is simply a domineering jerk.

Romance author Susabelle Kelmer says, “Who wants to read about a selfish jerk? We sure wouldn't want to date or marry one! There is a difference - a true alpha male has got to have redeeming qualities, or I'm not going to be able to get into the story.”

“I've read some stories where the alpha male was such a jerk I had to put down the book,” agrees paranormal author Karilyn Bentley, who writes the Demon Huntress series. “I like them where they are strong and capable but also have feelings and are kind.”

When reading any genre of novel, we expect our heroes to be strong and stand up for what they believe, but readers also want to connect with characters on a deeper level. Even an alpha male needs something to make him vulnerable, and thus human. He can't just flex his muscles and order women around. In a mystery or tale of suspense, he can’t be right 100% of the time. And in a romance, he needs to give as good as he gets.

So as you’re working on your next manuscript, keep these ideas in mind. And make that Alpha work for our approval.

"Alpha Guidelines"
DO make sure your hero is hot, ripped and ready for anything. No, he doesn’t have to be conventionally handsome (although it helps) but he needs to have self-confidence and a certain amount of arrogance about his looks.

DON’T take that self-confidence over the top into the realm of self-obsessed. No one like a Narcissist.

DO give him a job or a cause he can believe in, and something the reader can relate to in some way. Whether it’s a fireman who puts his life on the line, a Navy SEAL saving wounded soldiers, or a cowboy working hard to save the family ranch, readers love a man with a cause they can believe in too. The CEO who makes millions for his company just by shipping jobs overseas? Not so much. The CEO with a secret soft spot for disabled kids, who donates millions to the local children’s hospital? Swoon-worthy for sure.

DON’T make everything a cliché. Yes, there are stereotypes for good reason – those are formula characters that work. But that doesn’t mean readers aren’t looking for something fresh and new. From the alpha werewolf seeking a mate to the billionaire who marries the poor girl as part of some deal or to gain his inheritance… Yeah, overdone. The CEO who falls for his formerly shy assistant and dazzles her with fifty shades of kinky sexual situations? We’ve seen (and panned) the movie.

DON’T be afraid to try something fresh. There are all kinds of alphas out there, whether they’re in traditional alpha jobs or not. In LINGERIE WARS by Janet Elizabeth Hendersen, the hero was a former British special forces guy (okay, maybe a little cliché), who owned and ran a lingerie shop in Scotland! A twist to be sure, but it worked. Trust me.

DO give your hero a backstory that tugs at the reader’s heart. What made him the way he is today? A strong loving mom, being raised by a grandparent, childhood in an orphanage, a happy household filled with siblings, high school success or failure… try writing up a character background to see what makes the guy tick. What gives him strength? Why is he fighting for whatever it is he fights for? Eventually, some of this backstory needs to leak into your novel, to let the reader glimpse the hero’s vulnerability. If you totally understand the character and his motivations, it’s so much easier to make the reader fall in love with him.

There are all sorts of alpha heroes out there, and all sorts of readers to cater to. In the end, you need to write the guy YOU would fall for, whether he owns a comic book store, a construction company or a mansion and a yacht. Alpha is alpha.

Chances are, there will be plenty of readers on that same page.