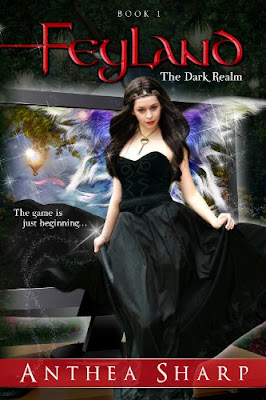 
Feyland is the most immersive computer game ever designed, and Jennet Carter is the first to play the prototype. But she doesn't suspect the virtual world is close enough to touch - or that she'll be battling for her life against the Dark Queen of the faeries.

Tam Linn is the perfect hero, in-game. Too bad the rest of his life is seriously flawed. The last thing he needs is rich-girl Jennet prying into his secrets, insisting he's the only one who can help her.

Together, Jennet and Tam enter the Dark Realm of Feyland, only to discover that the entire human world is in danger. Pushed to the limit of their abilities, they must defeat the Dark Queen... before it's too late.

Set in an undefined future of hovercars and wrist implants for identification, where the distance between haves and have-nots is greater than ever, FEYLAND takes the reader on a perilous journey into another realm.

The story starts with a high school gamer who gets in way over her head. In this future world, SIM gaming is the elite level, and Jennet's father is a bigwig at one of the biggest gaming companies in the world. When he brings home a prototype full-submersion simulator game, she can't resist checking it out, and gets caught up in a game that's much more than just a game.

Tam Linn is from the wrong side of the tracks, literally, but he's the glue holding his little dysfunctional family together. When Jennet finds out he's a nationally ranked gamer, she knows he's the one who can help her, but he's got enough problems without some rich girl adding to them.

This is a YA book, but with a sharp edge and a focus on the gaming world that probably won't resonate with teenaged girls. That said, its an absorbing story and as someone who loves fairy legends, I totally appreciated the imagery and nuances the author layered into the novel.

This is the first story in a series, but has a happy-for-now ending that satisfies and stands alone on its own two feet.  I'm not sure I will read more of the FEYLAND series, but was completely engrossed by this book and recommend it to those that like young adult books with a touch of fairy magic.